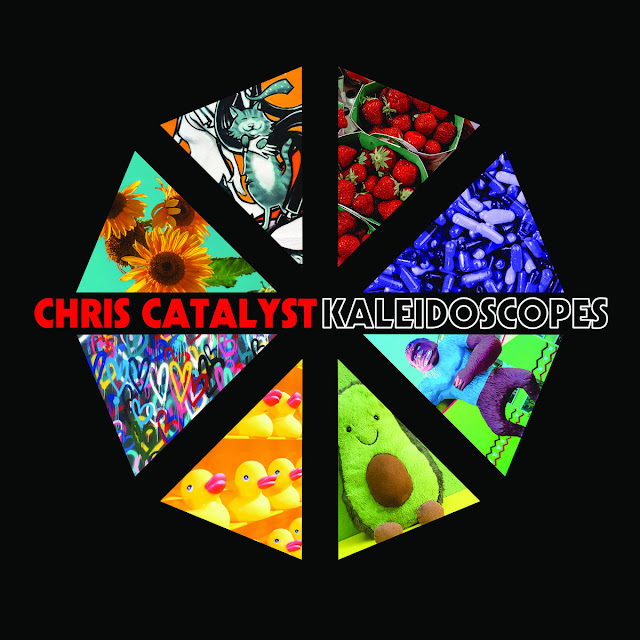 I owe a massive thanks to Roger Worton who contacted me recommending Chris Catalyst. I vaguely knew about Chris as a live guitarist with Ginger Wildheart and keyboard addition in my beloved Terrorvision. I also knew he was in Eureka Machines, a band that have never quite appealed to me, despite many recommendations.

So I was unexpectedly blown away by his second solo album. I've since seen reviews that say Kaleidoscope is testament to Catalyst's record collection and that seems more than a little unfair. Across the 12 tracks, there is a mass of variety, but this seems to be more about a show of versatility or even getting every idea down.

The wide spread of material may confuse a few who may wish for something a little more focussed. However, I am quite the opposite. I'm more than impressed by the variation and the overall impression is "Wow! What a talent!"

The album feels like a Brit Pop album and quite a few artists nod back towards the 90s, not many succeed and end up sounding like Oasis, god forbid. Not everything succeeds, but little fails and getting the full gamut of what Catalyst has to offer leaves you more than impressed.

Kaleidoscopes is exactly what Pop Rock should be. Songs that are not too Rock to split your ears or be more about technical ability than tunes and not the I Love You, Yes I Do of Pop. On repeated listens, you realise what a splendid album this is, it has such depth without ever losing sight of the hooks and choruses. It never tries to be too clever, versatility doesn't necessarily mean showing off.

One of the things that I've learned over the years is that the first song that you should listen to on an album is the second track. It generally gives you a feel of what the album will be like more than an opener. King Of Everything is an absolute joy, part Psych Pop, part killer singalong chorus.

The Ride is all Math Rock with its Muse like riff whilst Divide And Rule is wonderful UK late 60s Beat. A Modern Adventure is in Supergrass territory and Ordinary has a hint of Simon Le Bon. Falling Down edges towards Power Pop, yet becomes the anthemic closer.

Special mention should go to Happy which is great Pop in the mode of The Bluetones or The Supernaturals. It is an absolute crackerjack of a song. Many will point to the Neil Gaiman sampled, Make Good Art, which adds to the variance, but I'm not convinced that it should have been the opener with all this top notch Pop Rock around it. All in All Kaleidoscopes is highly recommended. You'll love it.

You can listen to and buy the album here. You can find out more about Chris Catalyst here.

Posted by Anything Should Happen at 12:51