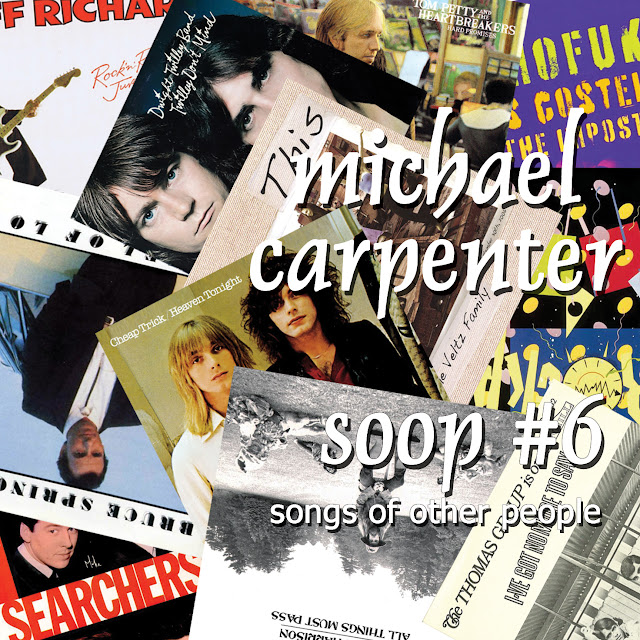 When Michael Carpenter released the excellent first SOOP in 2001, I never thought it would run to six volumes, I suspect nor did he. They aren't a regular thing, five more in the intervening 15 years and sandwiched in between his Power Pop, Americana and Country tinged albums.

These albums tend to be quicker affairs and provide even greater focus on his original material and to be honest, the quality has never dropped, Volume 6 being no exception. They tend to be Power Pop led with a mix of the obvious, the surprises and the lost gems. Volume 6 is just that again. Some of the songs are from previous tribute albums, others more recent.

The lost gems include The Veltz Family's wonderful Falling and Rockpile's When I Write The Book. The obvious are Cheap Trick's Surrender and The Searchers' Needle And Pins. Nothing much is added to Surrender, not much can be, but Needles And Pins is a much slower version that really works and has a country tinge.

The known are Bruce Springsteen's Tougher Than The Rest and Tom Petty's The Waiting, the former is a very different Part Americana part Country version. It's great. It's surprising to hear a cover of Cliff Richards' We Don't Talk Any More, never my favourite song, but at least it's not Wired For Sound.

Tougher Than The Rest is a gem but my favourites are songs I haven't heard for a while and / or songs that other people will discover. With that in mind, there's a cracking cover of Dwight Twilley's Here She Come and an even better happy clappy version of Elvis Costello's No Hiding Place.

George Harrison's What Is Life opens proceedings with a faithful to the original version, but it's still a great song. The remaining two songs again fall into the nice surprise category. A Cover of The Gerbils' Welcomed Here and PF Sloan and Steve Barri's I've Got No More To Say. I actually have the 1967 7 Inch of the latter by The Thomas Group.


Carpenter is ably assisted with Backing Vocals, in particular by Kylie Whitney. I know cover albums can get a bit ten a penny, but this series never has, All six albums stand up in their own right and this latest one, probably the most of all. It's a fine listen.

Carpenter has never released a bad album, he's not gonna start now. You can listen to and buy it here.


Posted by Anything Should Happen at 12:25