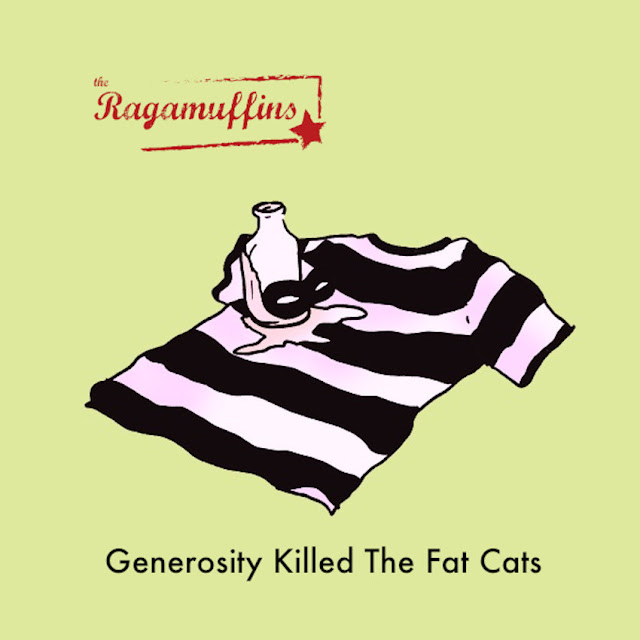 My original plan today was to review The Ragamuffin's latest album, Over On The Shipping Forecast, which is ace. But I've been so hooked by the band that I plan to take the advice of my good friend Nick Fletcher (ASH Swedish Department).

I'm gonna hook up with David Jaggs and get the full rundown on the latest platter direct from the horse's mouth. The world needs more left leaning Liverpool FC supporters and we are both a member of that club. Whilst I do that let me tell you a bit about them and set you on the road with last year's killer single, Generosity Killed The Fat Cats.

What a fine thing that is! Addictive Kitchen Sink Pop of the highest order. If a band could break both our age group and also drag along da kidz, it's The Ragamuffins.

Formed in 2007, the band went through a number of versions, largely synth and keyboard led. before emerging with the hook-laden choruses and smart lyrics that ultimately on their debut album The Irony Curtain, released in 2012.

Three more EPs followed where the band’s sound leaned more towards a Northern Soul feel without losing any of its indie roots. All songs are written by David Jaggs who sings and plays guitar (he’s also a fabulous pianist!). He’s originally from Liverpool but now lives in the Accrington area. Full band shows are powerful affairs with twin trumpets, but David does a great job playing the songs solo on guitar/piano.

One recent show saw him play non-stop for over 4 hours where he played the whole Ragamuffins canon plus a range of diverse covers by Elvis Costello (his hero), The Cure, Prince and many, many others.

They are clearly a band who have fun together and the banter at their shows is good. David Bash is a big fan and always introduces the band as “one of the smartest bands I know” at each IPO. The Ragamuffins play IPO every year and he’s not wrong.


I've deliberately avoided the new album in the two song previews. If these two songs have already got your juices flowing, you can head over to the band's Bandcamp site and listen to more and purchase anything from their back catalogue and Over On The Shipping Forecast.

You can find all these goodies here.


Posted by Anything Should Happen at 11:38

Email ThisBlogThis!Share to TwitterShare to FacebookShare to Pinterest
Labels: The Ragamuffins