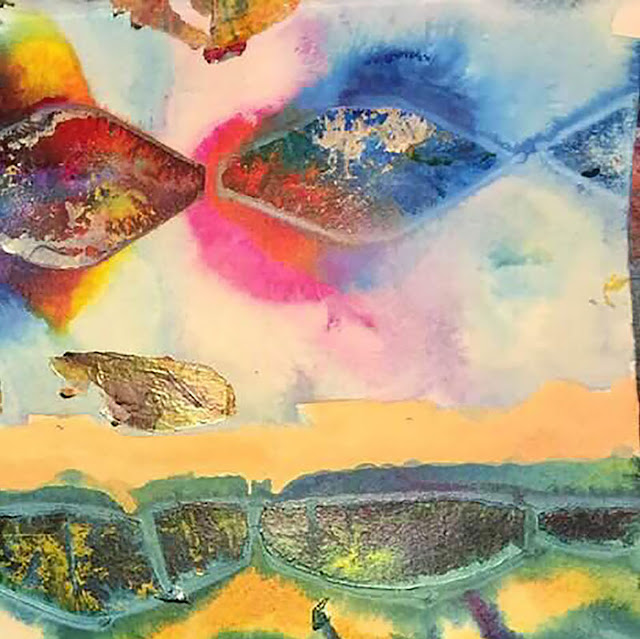 Curvey is back with a second instalment of Custard Flux goodness. Mick Dillingham catches up with the great man to find out all about it and he gives us a track by track breakdown of Echo.


Another glorious Custard Flux album is upon us and like everything Eden Hall’s Gregory Curvey unleashes it’s a psychedelic treasure chest of wonderful songs, masterfully played and beautifully produced. Let us sit down with the great man and find out all about Echo. So straight off, why Echo?


"I initially intended to name the album after one of the elements, like Helium, and already had permission to use an entirely different painting by Gregory Chamberlin for the cover, but that Echo knob on the cover of the Helium Box Set wouldn’t let me be.  The box did have enough room for another CD, so I went with the idea of making Echo an annex to the Helium Box Set."


This time you brought some other players on board for the sessions.


"Having Tim Prettyman play double bass on the album definitely added a new dimension to the sound.  The acoustic bass I played on the Helium tracks sounded pretty close to an electric bass, even though I didn’t use an amplifier.

America happened to be the first track we recorded the double bass on for this project, and as soon as we finished laying it down, I couldn’t believe how the sound was spatially altered.  You can almost feel the double bass in the room on the whole record.  Tim’s son Walt received a degree in classical violin and toured with a gypsy jazz band for a few years.  He’s a phenomenal player, and I’m extremely pleased with his contributions to this record."


A  handy song by song break down of Echo might be called for about now, don’t you think?

"Originally titled Supernatural Disaster, but that seemed a bit too negative and the world is desperately in need of positivity. It’s about my day to day struggling with the USA’s current political retardation, but I kept the lyrics vague.  The riff was one of the good ones I’d saved on my phone and I had the verse parts for a few weeks before the chorus finally came to me. Funny how that works. I love Walt’s violin playing on this track."

I was in my basement, working on the space where my stereo and records will one day be removed from their storage boxes and properly set up. I was listening to U2’s Boy album on my iPhone and reminiscing about that period in my life when new wave was fresh. Later that night, I was playing my guitar, while putting my daughter to bed and out popped the initial parts for Echo.  The original bones of the song got buried in some pretty distracting flesh."

"Originally titled Babylon. I had all the melodies and parts worked out, but couldn’t come up with any lyrics for weeks.  When they did come, I was in my studio and they just rolled out. The first verse was about baseball, so I wrote the second about apple pie, both have lots of hidden meanings. I think America has some of my better lyrics.

"I wrote this song thirteen years ago, and just weeks after my daughter was born.  It didn’t fit with the tracks on the The Luck Of Eden Hall album I was working on at the time, and I tried to pull it out for a subsequent albums, but it never made it.  Not to say it’s a b-song, I really like it.  It just never worked until now."

"My good friend Tim Ferguson (The Red Plastic Buddha) came to Detroit for a visit and we had some fun in my studio. I took the best one that we did that day, and turned it into Extraordinary Man, which is written about one of my good friends that is transitioning from a man to a woman. Love everyone folks. Don’t judge."

"The folks that pre-ordered a copy of the Helium Double LP directly from me, got a chance to hear all the songs on Echo in various stages of creation as a bonus for their endearing support.  Pink Indians definitely went through a transition.

The original version was a bit too poppy and the song came really close to getting cut, but I stripped it down and reworked the rhythm section with a progressive beat and added vocal tracks. The lyrics are made up, but based on real experiences, including losing my girlfriend in India for a spell. I thought of those times when your child is briefly missing and you’re beating down the fears of all the possible bad scenarios and then suddenly there they are, smiling and safe."

"Originally titled Silver and Gold, but I just went with the element. Last summer I was repairing a rotted window sill on the second floor of my house when this song came to me.  I’d go up and down the ladder singing “heading to the mountains...and living off the land...”.  I wrote two complete songs around that stanza, both with different ideas, and couldn’t stand either version, until I started splicing them together, which altered the meaning of the lyric to my liking."

"Another good riff I’d saved on my phone.  My friend Steven turned me on to My Friend The Sun, a really great old song by Family. I took my existing riff, sat down and wrote under the influence of the Family tune and this was the result.

My daughter went to Montessori School for a few years and on a child’s birthday,the teacher used to have them carry a little planet Earth in a circle, around a candle in a sun shaped candle holder on the floor.  I thought that was a cool ritual and was thinking of it when I wrote this song. The facts are true. We are travelling around sixteen hundred thousand miles per hour through space.


Echo is a magnificent, well worth your attention. You can listen to and buy the album here.

Posted by Anything Should Happen at 16:54