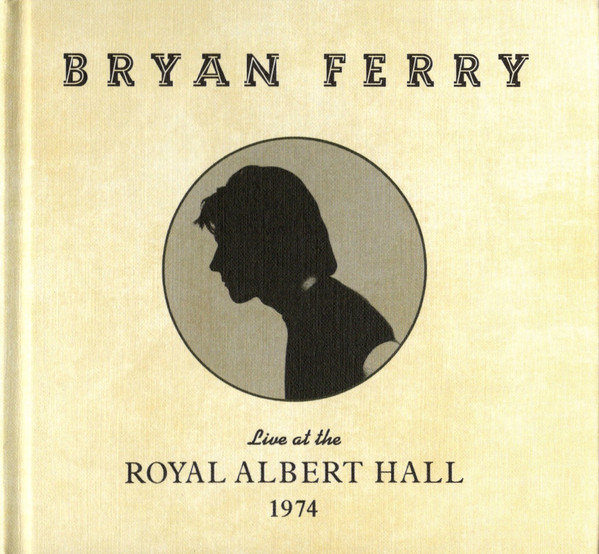 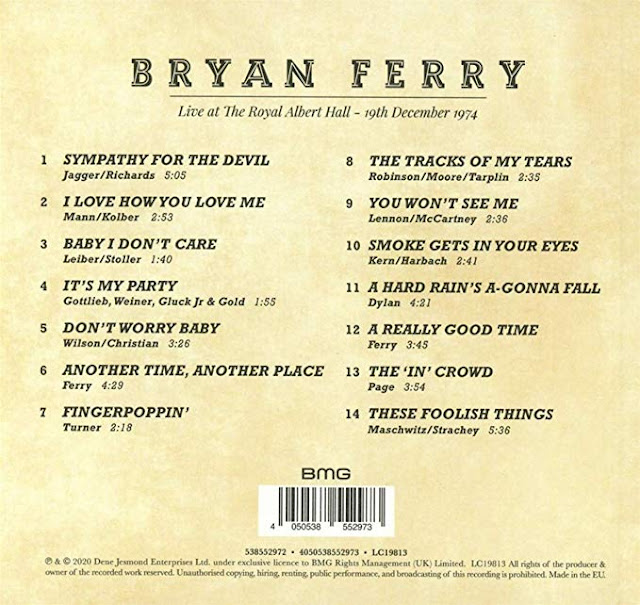 The IDHAS Reviews return and Ian Rushbury makes his I Don't Hear A Single debut.

No matter how cool you are, you will never be as cool as Bryan Ferry was in 1974. In just two years, he’d released four (that’s FOUR) breathtaking albums with Roxy Music, two hugely successful solo albums, toured all over the world and looked like a Gauloises smoking matinee idol while he did it. Let’s face it, his “to-do” list was WAY different to yours.

Towards the end of 1974, our Bryan found himself at a loose end. A normal human being might have wound down at the end of a busy year, with a pile of Catherine Cooksons and a big bag of heavily salted snack treats. Not Bryan. He managed to shoehorn in a quick UK tour with a full orchestra before Christmas......and record it, of course.

Fast forward to 2020 and he’s still going. As I write, he’s just finished a UK tour, so the official release of his 19th December, 1974 show at the Royal Albert Hall, has a postmodern aura that Mr Ferry would wholeheartedly approve of. Yeah, I know you’ve got the bootleg, but this recording has been delightfully spiffed up and sounds great. Kudos to whoever was looking after the Master Tapes for the last 45 years.


Bryan and his all-star band (let’s face it, it was practically Roxy Music standing behind him) sound great here. The choice of material is the dictionary definition of eclectic – if you went along to the RAH expecting to hear “Virginia Plain” etc, you’d be sorely disappointed. If Roxy Music seemed to exist in some parallel time zone, in a weird, retro version of the 21st century , then Bryan Ferry solo lives somewhere between 1925 and 1968.

Covers of material by Lesley Gore, The Miracles, Dobie Gray and, erm, Jerome Kern, rub up against two Ferry originals – “Another Time, Another Place” and “A Really Good Time.” Fortunately, his stellar band navigate these crazy chicanes with style and aplomb. Everyone here seems to be having a lot of fun.

Ferry sounds superb and is relishing performing the songs he cut his teeth on when he sang in garage bands in the north east of England. “The Tracks of My Tears” for example, is delivered with real strength, his trademark vibrato used to great effect.

Wisely, he keeps the arrangements fairly faithful to originals, but gives the musicians free reign to embellish them, so you get to hear John Wetton invent Disco at the start of “Fingerpoppin’,” Phil Manzanera gets atonal during “(You’re so Square) Baby I Don’t Care” and The Great Paul Thompson clatters through everything in a very pleasing manner. I do miss David O’List’s manic, heavy metal guitar solo at the end of “The In Crowd,” but that’s just me being a contrarian.

We don’t get the whole gig. “Help Me Make it Through The Night”, “Loving You Is Sweeter Than Ever”, “Funny How Time Slips Away” and “You Are My Sunshine” have been consigned to the cutting room floor, for reasons unknown. But the 14 songs that remain are good enough, especially when they’ve been sonically polished to a high sheen. This is a lovely postcard from a very different time.

So, ladies and gentlemen, once you’ve listened to and enjoyed “Live at the Royal Albert Hall, 1974,” you’d better roll your sleeves up. You’ve got six albums, umpteen tours and a lot of cigarette smoking to get through between now and 2022…


You can buy and listen to Live At The Albert Hall 1974 everywhere.