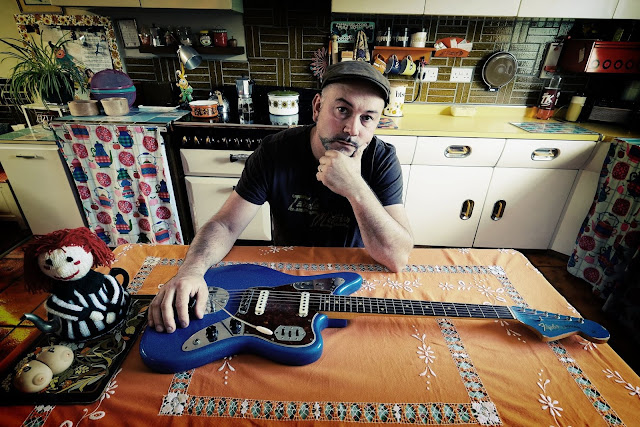 One of the highlights of last year was the unexpected welcome return of Barry O’ Brien’s Slumberjet arriving with a superb second album after a long ten year absence. The Duncan Maitland produced World Of Sound is everything you would wish from a Slumberjet release, full of songs, melody and invention of the finest order. Soon enough it lodged itself into countless albums of the year lists. Time to catch up with the man himself.


What are your earliest memories of first getting into music?


"Probably hearing the radio in the kitchen or the back seat of my mother’s car. My eldest brother had a very eclectic taste and had introduced me to some diverse styles of music from a very young age like Rory Gallagher, Ten Years After, The Stones, Floyd, Zeppelin, UB40, The Police, the B52’s and Roxy Music.  My older sister too when she bought her first stereo would be coming home every week with Top 40 singles and also she had albums like Fleetwood Mac’s Rumours, Bob Marley’s Uprising and ABBA records among others. I also have memories of hearing our next-door neighbour blasting The Beatles out their window.

It seemed like The Beatles we’re always there in the background quite literally. I asked for some Beatles for my seventh birthday and got Revolver and Sgt Pepper on cassette.  I remember gravitating more towards McCartney’s songs like “Got To Get You Into My Life” and “For No One”. There was a lot of stuff coming from all directions. Top Of The Pops on BBC 1 was a weekly ritual in our house. The first band to really have an effect on me was The Police.  My brother emigrated to America and left his stereo and a copy of Regatta De Blanc, which I played endlessly from start to finish.

I vividly remember watching their video for Walking On The Moon on Top Of The Pops and being completely in awe of them, so funny watching Stewart Copeland banging on the side of the rocket with his sticks. The first album I got of my own personal choice was Tears for Fears' Songs From The Big Chair and these are albums that over the years I keep going back to.

My parents got me piano lessons from the age of seven for a while, but I unfortunately didn’t take to it. I came to Guitar on my own at the age of fourteen by saving up my money to buy an Electric one. My mother insisted I take lessons to which I was grateful. I eventually found a guitar teacher I liked, it did take a while though.

It was mainly playing in friends garages and living rooms until I was about sixteen, but when the 90’s came in it was bands like Living Colour ,Chilli Peppers, Jane’s Addiction, Faith No More and then the whole Seattle thing happened and it was all very inspiring. I met Aidan O’Grady, the drummer who latter played in both Slumberjet and Pugwash, around this time and we set out to start our own band which became Peyote.  I was just a guitar player back then, but that was great fun while it lasted."


When did you start writing songs and why?


"I was a late bloomer when it came to songwriting, After Peyote split up, I decided to go back to guitar lessons and find a new musical direction. I eventually gravitated towards singing and songwriting for a number of reasons. One of which was my teacher at the time who encouraged me to learn and sing songs, which is something bizarrely, I never really did because I had focused on just being a guitar player up to that point.  So when I started singing it opened up a whole new way of thinking for me.

I started writing my own songs, but I think It was Jeff Buckley that inspired me to start playing at open mic nights and learn my craft like he and so many before him had done. I did so for years. I eventually found my own voice and style and I no longer needed a band to make music which I found liberating, even though I still love playing with a band.

The Spark EP was basically Slumberjet mark one, even though it went out as a solo EP.  I was still figuring it all out while it was in motion.  Aidan O’Grady and Keith Farrell were both in their own band, Las Vegas Basement as well as Pugwash.   I asked them if they would be into maybe doing some gigs and recording with my own stuff and to my surprise they did.  So we became a three piece. They really helped bring these songs, that I had been playing in at the open mic nights, to life. Keith at this point had recorded a few albums for Pugwash among others and it seemed like the logical thing to have him engineer and produce.

I got to know Thomas Walsh through mutual friends and he introduced me to so much great music over the years making these amazing compilation CD’s of classic Psych Pop and modern Power Pop. Stuff like Myracle Brah, Cotton Mather, but when he introduced me to Jason Falkner and Eric Matthews's music my mind was blown .Around the time, Thomas started recording the first Pugwash album he got to know Jason.

A little after that a bunch of us went to London to see Jason and his band play at The Garage.  A few months latter when Jason was in Dublin supporting Alanis Morrisette, Thomas organised a small gig for him for which we all played our part in helping putting up flyers and gathering gear etc.  This became a regular thing for a few years, whenever Jason was playing in Dublin with AIR. Thomas also got to know Eric Matthews and had asked him to play on a few tracks for the “Jollity” album.

When I was recording the first Slumberjet album, I plucked up the courage to ask Eric to play on some tracks.  To my delight he sang some amazing backing vocals and added guitar parts and strings. We reworked a few things on the Spark EP, but basically carried it over for the album and did a completely different version of  Sisters In The Sky. This is where Duncan Maitland came in on this and many other tracks on the first album. It was recorded over a few years, time and money being the main obstacles, but we got there in the end and I am very proud of that album."


How does the live experience work for you?


"These songs started with me playing them solo acoustic, then it became a band for a while which was great fun, but for now it’s back to just me solo acoustic, which I’m very comfortable with.  Slumberjet as a band has become more of a studio project."


Onto the latest album World Of Sound after a ten year gap.


"As the saying goes life gets in the way, I am slow, but I feel no time was wasted, because I simply want to make the best album I can. I don’t have a label pressuring me for product and I certainly didn’t want to put out another album just for the sake of it."


How was the recording process?


"Overall, I think it went smoothly, I really enjoyed working with Duncan Maitland on this album. We took our time and made sure we we’re happy with everything we we’re putting down. Everyone involved brought something special to it and I think you can hear that in the finished result."


How happy are you with the finished album?


"Very happy. I set out to make it better then the first Slumberjet album even though I’m still very proud of that, I feel myself and Duncan achieved what we set out to do with “World of Sound”.


How does the song writing process work with you, where do you lyrical ideas come from?


"It usually starts with the music and that inspires a lyric, whatever that may be? There’s quite a variety of themes on the “World of Sound” album like The Big Snow. That is basically a childhood memory to a song like “Calling” which is a about the death of a parent or something like “Float” which is a love song."


"In no particular order these are some of the pillars to which I’ve discovered many different influences from. The Beatles, The Police, Jeff Buckley, Jane’s Addiction, Elvis Costello, XTC, Jason Falkner, Bowie, Prince, Beach Boys, Motown ,The Smiths ,Nirvana ,The Kinks."


How’s the feedback to the album been so far?


"Fantastic, I think we’ve got some incredible reviews and support from Radio DJ’s, blogs and press and I'd like to thank them all for help getting “World of Sound” out there. I hope to get out and play some solo acoustic gigs this year, maybe do some with Duncan Maitland, but other than that I will be going back to the drawing board."


Lets finish off with a track by track breakdown.

"This is the oldest song on the album. There was a longer, more rocked out version I had recorded for the first Slumberjet album, but it didn’t work. So I reworked it for album No 2 and titled the album after it."

"I thought I was ripping off Vanishing Girl by the Dukes of Stratosphere, but Duncan didn’t think so. I love what the band played on this track, everyone reacted to each other’s parts. I also love the guitar solo even if I say so myself."


(Theme from) Our Street.

"This is basically like a theme song to a imaginary TV show in the vein of those classic TV show themes like The Monkees, The Banana Splits or Sesame Street. There's also a bit of Kinks thrown in there for good measure."

"Float is a love song to my wife. Musically, I was going for that Big Star/Teenage Fanclub vibe. I think it turned out pretty good."

"I suppose this is from years of listening to Jason Falkner. The middle 8 has this Pink Floyd vibe to it and it really takes the song somewhere else for that few moments, before coming back into it."

"This is probably my favourite track on the album for a number of reasons. One being, remembering watching Duncan put down all these amazing parts that really brought the song to life. Also we went for a 10cc I’m Not In Love wall of vocals vibe for the bridge part ."

"Andy Partridge is a big influence on this track. The lyrics are semi biographical about a childhood memory."

"This is about moving forward after the first album came out. I had split the band that I had, so I was starting all over again from ground zero."

"This song is about the passing of my Mother.  Salad Days reprise is basically the bridge part of Salad Days done in a McCartney-esque finger style a la Blackbird /Mother Nature’s Son."

"This was the first song I wrote after I finished the first album.  I wanted it to have more jangle in it, so I took out the Rickenbacker guitars. Duncan goes all Neill Young on the guitar solo too."

"A Costello like verse with a Nirvana like chorus. Duncan plays these chords in the verses that gives the song a real lift. Johnny Boyle and Keith Farrell's drums/bass are on fire on this too." 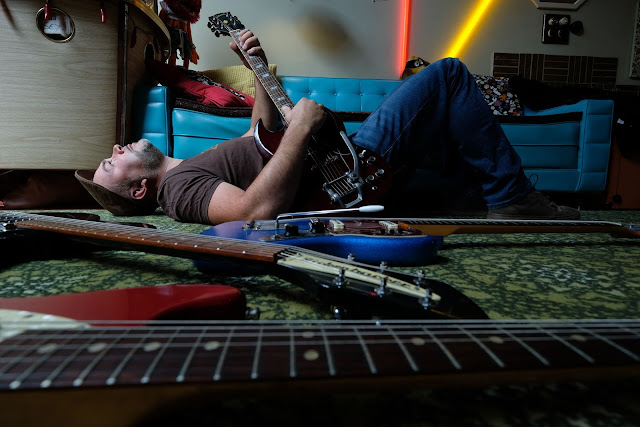 You can listen to and buy World Of Sound here.