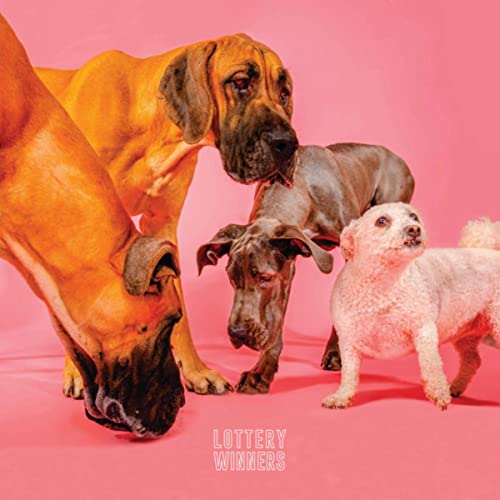 The Lottery Winners are a quartet that hail from Leigh, a town that is a few miles from my home town. Leigh is like any North West Town, years of neglect coming home to roost now and resulting in the self isolation of Brexit. The town could never be described as a hot bed of musical delight. So to be discovered by Seymour Stein of all people is quite some feat indeed.

Two years in the making and over a decade in the waiting, The Lottery Winners' self titled debut is with us on the splendid Modern Sky UK label and it is a joyous romp. The whole affair comes across as a celebration of the 90's UK Music Scene from Baggy to Brit Pop, centring on the latter.


Yes there have been plenty of Brit Pop flavoured albums since 1998, but nothing has sounded as fun as this. Gigantic choruses mask a real wit in the songwriting and it does break out into something more mow at times on songs such as Hawaii. But the album's strength is how makes the 90's comparisons sound so modern and new.

Elizabeth could almost be Twee Glasgow in the second half of the 80's and 21 comes out somewhere between The Seahorses and Kula Shaker. 18 To 30s is top notch Brit Pop with it's Blur Riff. That's Not Entertainment is another great get up and go song.


There are a host of killer singles here, particularly the delightful, I Know. Indeed any of these 12 songs could be a single which is astounding. Imagine a debut album that could also be a Greatest Hits. Attention will probably be focused on the anthemic The Meaning Of Life or the swagger of Little Things, but there is far more here than those two album openers.

The Lottery Winners have fashioned up an album of sing along gems with a songwriting quality that bites lyrically whilst serenading you. It is a long time since I've heard a debut album as accomplished as this. Highly Recommended. Well done you lot!


You can buy the album in various formats or as a download here.

Email ThisBlogThis!Share to TwitterShare to FacebookShare to Pinterest
Labels: The Lottery Winners