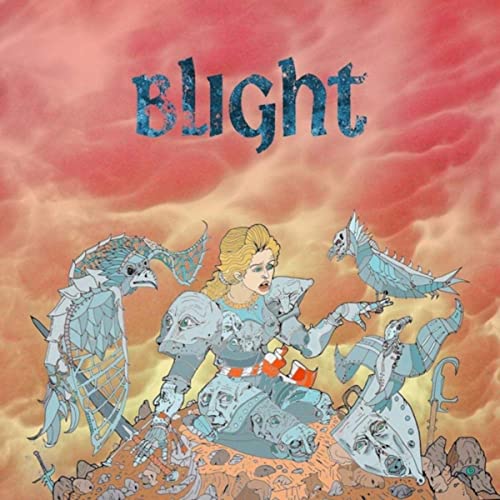 If there is one problem with new Pop Rock Reviews presently, it is that those reviews all seem to be from the same albums doing the rounds. This isn't a criticism, there are some fine albums amongst them, but there is a nagging feeling that reviewers have stopped looking for something different. It is as though they review what is in front of them.

I'm not one for looking back, but just 12 months ago, there was still a batch of reviewers who surprised you with something that you hadn't heard. I hope this doesn't become the norm in the way that the copy and paste of PR Pieces did. I'd rather read less from people who actually listen to an album.


Blight are such an example, I've seen little about their album around, yet it covers so many angles that it can only be that their email campaign isn't as large as others. This Norway Quartet could never be accused of being Pop orientated, but there is masses to admire.

Some will lazily lump them in with Hard Rock, which isn't them at all. They master Rock, Psych and Prog with ease and everything is built on killer Guitar Riffs. The variance is also aided Haakon Raa Tveit's vocals which have more than a hint of Russell Mael at times.


Whilst Restless Chase is Rock with a capital R, there is more than enough here to interest all. There is so much to like here from the the driving, Legend to the magnificence that is I'm Still Here. The album doesn't come up for air too often, but when it does slow down on the odd occasion, a song like Come Alive reveals that this lot are no One Trick Pony.

Rise, the closing track is everything that you want in a Modern Prog song, a genre not noted for much lately apart from Kitchen Sink Production. This album than noisier than what you may normally listen to, but just as worthwhile. The Guitar Runs will hook you and it may be loud, but it is infectious. I love it. I'd be interested to hear Mick's opinion.

Posted by Anything Should Happen at 13:42

Email ThisBlogThis!Share to TwitterShare to FacebookShare to Pinterest
Labels: Blight