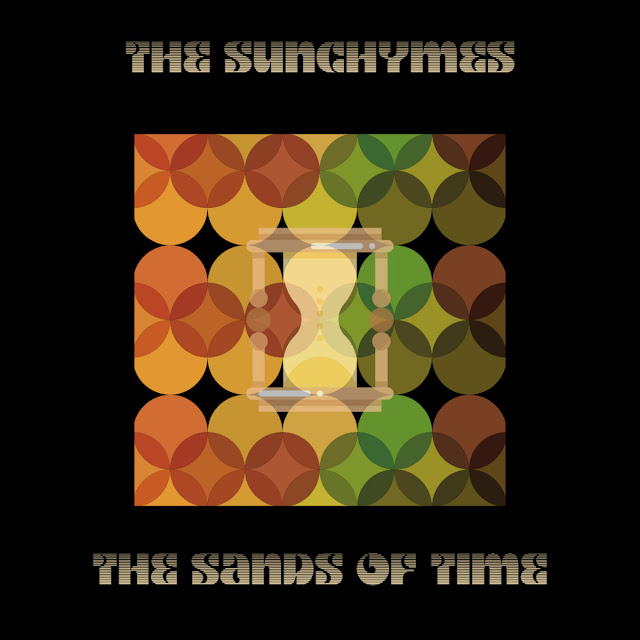 The Sunchymes are a British psychedelic pop combo from Northampton who for the last decade have been producing wonderfully engaging retro psych music of the finest calibre.  Great songs, great melodies, great playing, great production, there’s a lot of great going on here.

There’s plenty of craft, thoughtful inventiveness and heart put into this often epic music and every listen is wonderfully rewarding.  On closer inspection, The Sunchymes turn out to not to be a band at all, but actually a one man tour de force named Aaron Hemmington. Aaron does nearly everything and very impressive this everything is. Time to get some background from the man himself.


So how did you get started?

“When I was around fourteen years old, a friend of mine gave me a Beatles greatest hits tape and around the same time, I also got a Beach Boys greatest hits album. I listened to these a lot. I also started to read more about both bands and got more of their albums.

My cousin had an original vinyl copy of Revolver and it blew me away. It was The Beatles and The Beach Boys that made sit up and take notice, particularly when I first heard Pet Sounds, Revolver and Sgt Pepper. I was fascinated about how these albums were recorded.

The level of song writing and production was such a leap for the times, the like of which we have not really seen since. It made me want to write and record music. Around that time a few of my friends started playing guitar and hearing them made me want to play. I wanted to start writing songs too.  I started playing guitar when I was around fifteen.

The first songs I wrote were with a band that I was in when I was about sixteen. I think my early songs were mainly riff based, but by the time I was eighteen I had learnt more about chords and how to put them together. From that point I was able to write more songs that had that kind of Beatles and Beach Boys influence. I would have to say The Beach Boys and The Beatles are my biggest influences followed by the likes of The Byrds and The Zombies.

I really spent quite a few years experimenting by putting inversions and diminished chords into songs, as well as trying out different structures and practising vocal harmony arrangements. My friends and I had a great guitar teacher called Richard Beaumont, who I believe is a genius. He could play guitar like John McLaughlin and taught us lots about chords and scales and how to fit stuff together. That really helped me.”


So ‘Shifting Sands’ arrived out of nowhere in 2009 and caused quite a stir.

“Shifting Sands was the first recording I did that had ever been released.  I had been in a few bands prior to starting The Sunchymes in 2008. Whilst quite a bit of material was recorded in my earlier bands, it was never released. I think it was that that made me want to record and release an album. By 2008, it was possible for anyone to record and release their own stuff through the likes of CD Baby.

I am in the 'Retro Psych' camp. What psychedelic music means to me is the expansion of Rock and Pop music to encompass additional elements such as classical, jazz and eastern music and to combine that with a higher level of production values and arrangements.

In terms of contemporary bands and artists I was listening to The Wondermints, Jellyfish, Jason Falkner, Cotton Mather, The Cosmic Rough Riders and The High Llamas.”

“Shifting Sands was a reasonable platform and from that I wanted to progress in terms of writing and recording. For this album I wrote all the songs in one complete song cycle whereas ‘Shifting Sands’ included some songs I had written ten years before in 1998.”

“This was very much a continuation of 'Let Your Free Flag Fly' in terms of sound and production. The main difference is that there a few slower tracks on 'Present', as I wanted to explore the 'Odessey and Oracle' and 'Pet Sounds' approach a bit more. I'd learnt a few more production tricks that I tried on this record such as the reverse reverb sound on the 'I'll Call You Up Today'.

My cousin, Justin had played on some of my albums and we also play in the Paperweight Array together. He main instrument is Bass, but he is an excellent all round musician and has lots of engineering and production skills.

Towards the end of recording 'Present', I decided that I wanted to play in a band again and contacted Justin and an old friend Duncan who plays drums. We have all known each other for many years and had played in bands together in the late 90's and 2000's. Luckily they were both up for it and we started jamming together at a local rehearsal studio.

It was a different process as one of us would bring in an idea and together, we would develop it into a complete song. So it is totally about collaboration and that is what I wanted to experience again. We have released three EP's and we are currently writing more stuff.”


‘Sands Of Time’ is your latest album and its another classic. Tell us about the recording.

“I have a small home studio set up. When I have written and structured the song, I get the drums down first. I would then record the guitar tracks and then the bass track. On' The Sands of Time' I used a mixture of my Fender USA Stratocaster, Danelectro 12 String, Yamaha Accoustic guitar and my Fender Jazz Bass.

I recorded the guitar through a Vox Tonelab SE. Following that I would then put keyboards on, but I consciously tried not to put keyboards on every song. The keyboards would mainly comprise of Hammond Organ, Piano, Fender Rhodes or Mellotron.

However, there are some string arrangements on a couple of songs. I would then record the lead vocals and harmony vocals using an AKG microphone through a Focusrite ISA One pre-amp. The vocals would usually take a lot of time in terms of experimenting with different vocal harmony arrangements and voicings.”


How does the song writing process work with you?

“I generally start with the chords and then write the vocal melodies and lyrics after that. I can usually come up with chord sequences fairly quickly, but the lyrical ideas take longer to develop. Sometimes I like to write about different fictional characters or places and sometimes I like to write about topical things. There will be a period of time where I write a few songs, but in another similar period of time I might only write one song.

I wanted the guitars to feature more on the new album so I got a Danelectro 12 string and wrote some songs that would suit a 'Byrdsian' type of sound. Pretty much all the songs were part of the same song cycle except 'Emily Layne,' which is a track I had initially written a few years ago and had developed over time.

‘Telepathy’ was the first track recorded for the album and the first that I used the Danelectro 12 String on. It starts off with a descending chord sequence with inversions and the odd half diminished chord.

I was pleased with lead guitar licks I put over it using the Strat. The sequence on the first verse ascends and then descends and the vocal is quite melodic. Chord wise it’s quite influenced by The Beach Boys and Wondermints, but I was aiming for a Byrdsian sound.


‘Meet The Seeker’ was a fun song to do both musically and lyrically. I like writing about fictional characters. I decided to use a wah pedal for the lead guitar licks and used a slightly over driven rhythm guitar sound with a bit of Hammond in the background.

I had been listening to a lot of British psychedelic bands such as The Move and The Moody Blues as well as the more underground stuff on the Rubble Collection. This inspired me to write this song. I have both of the Rubble Box Sets and The Nuggets Collection. In the summertime, I really like to listen to Nugget,s but the rest of the year I’m more into Rubble.

With ‘In A Century's Time', I wanted to finish the album with a song that made a statement. I had been paying a lot more attention to warnings about the climate and it made me think about what sort of world we a leaving for our kids and grandchildren.

I went for a fairly Beatlesque sound and chord wise used a few inversions. I tried to go for a big end section to finish the album so put some strings on and it was fun to work on.”


You can listen to and buy The Sands Of Time and The Sunchymes' back catalogue here.

Email ThisBlogThis!Share to TwitterShare to FacebookShare to Pinterest
Labels: Mick Dillingham, The Sunchymes