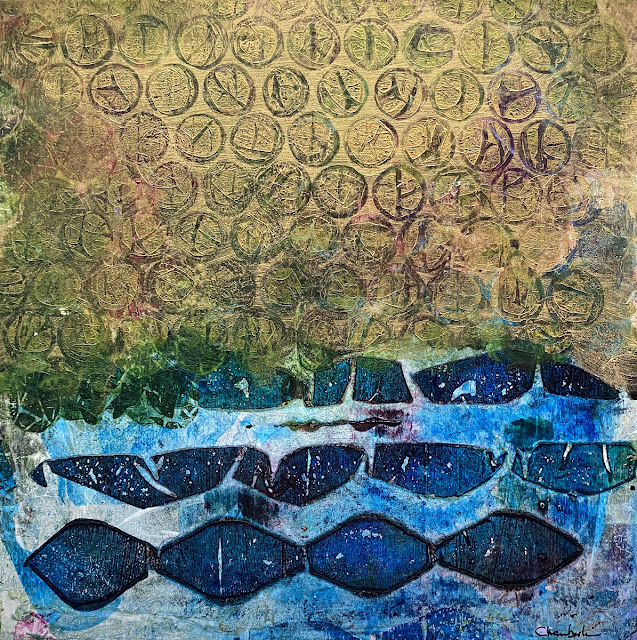 Oxygen the third album by Curvey’s Custard Flux project has arrived and as with everything the great man releases, there’s no need to worry here. The stars turn in the heavens above and everything is as it should be in the wonderful world of Curvey.  Oxygen is full to the brim with marvellous heart felt songs smothered in sensational and adventurous musicianship and blessed with yet another beautiful kaleidoscopic production.

Such is the assured consistency of his creativity that I can confidently buff up yet another five star award and slot it into place even before hearing Oxygen for the first time, knowing full well those five stars will be effortlessly deserved. As a listener, it’s a great position to find yourself in, to be so very sure that what is about to be delivered into our heart and mind will not disappoint.

Then comes the first listen and…and….hell let's not even pretend this is a cliff hanger  because we all know how this turns out.  It turns out right.  The three Custard Flux albums are like three beautiful sisters, unmistakably sisters at all times, but each with a individual personality that makes each of them unique unto themselves. Oh hold on here’s Curvey passing by my windows right now, let me grab him and get some background on the latest platter.


What’s going on with you good sir?

“First off, I’d like to say thank you to everyone who supported Echo and helped make it such a successful release.  I sincerely appreciate the DJs, bloggers, magazines and fans who keep this little train rolling.”

“It’s a mystery to me what makes one album sell better than the next.  When we released The Luck of Eden Hall’s Victoria Moon, Clearspot, my distributor in the Netherlands, sold 250 copies in the first five days. But that didn’t happen with the next album, The Acceleration of Time, which got more coverage and better reviews and in my opinion was a better album.  When I recorded the first Custard Flux album, Helium, I couldn’t get any label support, so I decided to have them manufactured here in the states, at Smashed Plastic in Chicago, who did a fantastic job with the printing and pressing.  But it turned out to be a foolish decision on my part, because most of my sales are in Europe and shipping a box of 80 LPs to the Netherlands cost a lot of money.  It was actually three boxes.

The album didn’t sell as much as I’d hoped, in part because of shipping costs and also probably due to my releasing a CD box set of the same music one year earlier.  I’d chosen to do CDs first because it was less expensive, but had a ton of requests for an LP version, so I went for it.  I did sell enough copies to pay for my investment, but I still have a couple boxes of Helium LPs in stock, which I’d really like to get sold off.

When I was going to release Echo, I approached Keith at Fruits de Mer Records and he kindly offered me a Friends of the Fish release.  I was ecstatic, because it meant extra promotional support and some guaranteed sales. I’m now down to my last thirteen copies of the Echo LP and those good sales put enough extra money in the coffers to cover most of the manufacturing costs of Oxygen, but it’s certainly no guarantee that Oxygen will sell as well as Echo.  So, here I sit.  Eyes closed, fingers crossed, preparing to spin the roulette wheel once again.”

So tell us about the recording of Oxygen.

“Some of the Oxygen tracks were already in their embryonic stages when we recorded the songs for the bonus CD that’s included in each Echo LP. I Feed The Fire did make it on to that release, but Vito Greco has since recorded a new solo for the ending and I remixed the track, to great improvement in my opinion.

The bulk of the recording took place during the first few weeks of mandatory quarantine. I’m incredibly fortunate to have my own recording studio and used the lockdown time to my advantage. I initially set down to record all the parts myself, being as I had no choice, but then I remembered Vito had recording gear and we started sharing tracks. I knew the Psychedelic Furs Tour, like all tours, had been cancelled, so I reached out to Mars Williams, who’d played on a track for The Luck of Eden Hall and he was happy to help.

I’d been hearing a saxophone part in my head that I wanted recorded and when Mars agreed, I wanted to utilize his playing for the solos on Gelatinous Mass, to introduce another sound other than guitar. Then Tim and Walt Prettyman got what they needed to do some home recording, by mail order and that was sorted. I knew I wanted to call the next album Oxygen since the wrapping up of Echo and had already chosen the perfect image for the cover, painted by Gregory Chamberlin.

It was only after all the songs were completed, as I sat listening to the full album, that I realized how much the project had been influenced by the virus and it’s effects on us all. I’d like to dedicate Oxygen to the folks that lost their lives to the virus.”


Any chance of a track by track guide to Oxygen?

"I’d been messing around with this guitar part in 5/4, but it took me a while to find the right melody to sing over it, especially one that I could sing while playing guitar. The lyrics are about meditation. My daughter had been having a bit of trouble with anxiety and I’d recently shared the gift of meditation with her."

"When I just can’t find the right vocal melody, it’s instrumental time. I figured the soloing would be covered by my Flying V on this track, but I really like to try to stick to my “no electricity” rule if possible and was ecstatic about Mars playing sax on it. Heavy electricity free Prog."

You Can’t Get Away.

"I like this song. It’s written about killing time while under quarantine. I’d had the structure worked out for months, but when it was all recorded it didn’t feel quite right. Actually, after all nine songs were finished, the album had a problem with continuity. The sounds were kind of all over the place. Sax solos, violin solos, acoustic and electric guitar solos. So I decided to break my rule and stitch the tunes together by doubling parts with my Flying V. I hope you don’t mind."

"I picked up the guitar and this song fell out. It’s morbid. I live in the Detroit metro area. Lots of people were and still are, dying. I was reading horrible stories about people being left alone in rooms to die. I chose it for the single and artist Shane Swank created a beautiful music video for it. Vito plays a really cool Brazilian instrument on this track, too."

"I was a monster fiend in my youth. I loved to read magazines like Creepy, Eerie, Famous Monsters of Filmland, and Weird Tales. The Ghoul was a television personality that hosted monster movies every Saturday night and I always tried to stay up late and watch his show. Creature Feature ruled too, with all of the Japanese monster films. Monster Island is a place in the movie Godzilla’s Revenge."


I Feed The Fire.

"I absolutely love where Vito’s guitar part took this track. I knew I wanted the song to start with a train whistle and found a wooden one on EBay. The lyrics are about humanity, blasting forward, laying everything to waste to achieve light speed and the acknowledgement that I am part of humanity.

She Opens Her Eyes.

"This is one of those tracks where the original sketch and the final mix sound completely different. After laying down the drum part, I deconstructed the song and reworked the bass, guitar riffs and vocal melody, until I enjoyed listening to the song again. I figure if I don’t want to listen to the song, why would anyone else want to?

Vito plays the Brazilian guitar again on this track and I liked the sound of it so much that I made a special mix which is included as a digital bonus track. I had bought a bow meant for using on acoustic guitar and used it on Quarantyne to great effect, so I tried it on this song as well. Walt’s fabulous violin solo was the last thing added. The lyrics are a metaphor for lady liberty and my hope for a more liberal and sane direction in our next election."

"Yes, the title is an homage to the Strawberry Alarm Clock hit. I was writing about my daughter again. She’d just had a bad break up with her closest friend and confidant and was taking it kind of hard. It’s hard being a parent and watching your child experience pain.

This was the last track to be completed on the album. I wrote it on guitar, but Tim and Walt’s parts, along with the Harpsichord, took it to a different place. The recorder was a last minute addition and makes me think of Donovan."

"Ahh, the piece de resistance. My favorite on the record. Vito suggested we do electric solos on this one and who was I to disagree? Being in quarantine gave me time to figure out how to use iMovie, so I made my first music video using footage I’d shot driving into the city of Chicago, along with footage I’d shot driving in the Welsh countryside. There’s an image in the video of half my face with streaks of horizontal lines that I didn’t create.

I’d used my phone to shoot a short movie of my computer screen whilst I fiddled with Photoshop, which worked fine, but when I did some colour editing of the movie on my phone, that half face video just magically appeared in my photo files. A gift from the cyber gods."

"On March 7th, my wife rushed me to the hospital because I was experiencing severe pains in my lower abdomen. While there, I was dosed with Ketamine and experienced bad hallucinations. This song is about that experience. Turns out it was a kidney stone, that I passed while I was at the hospital, so they sent me home. We got to the hospital at 6pm and left at 6am.”


You can pre-order the vinyl release, buy the download and listen to Oxygen here.