Introducing The Latest Addition To The IDHAS Team 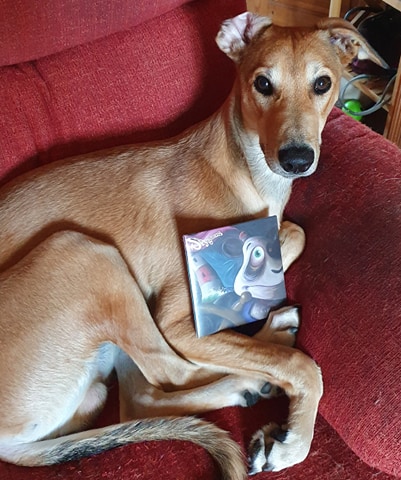 Say Hello to Bailey. Some of you may remember Crash, the Power Pop Lurcher, who sadly died in September and is much missed. Bailey joined the team in February and has been undergoing intensive training. He has been impatient to get into action. We only employ Lurchers in the role.

He was told that he could when he was six months old, so here he is. His tastes are slightly different to Crash, he tends to favour Psych Pop more than Power Pop. So when the upcoming Spygenius CD arrived in the post today, I could hold him back no longer.

This has been his favourite listen for the past couple of months and so it seemed fitting to be his first Wheel Of Fortune Photo. We are having external ISP problems at the moment that may not be sorted until the weekend, so I asked him to wait until then. He was having none of it.

He talked his Mum into using her 4G to upload his photo and I explained that these posts only go on Facebook. However, he was adamant that he would like his debut to appear on I Don't Hear A Single and agreed to stop barking if this appeared here. So here he is, trying to contain his excitement.

Posted by Anything Should Happen at 17:26