Papills - Too Hot For May 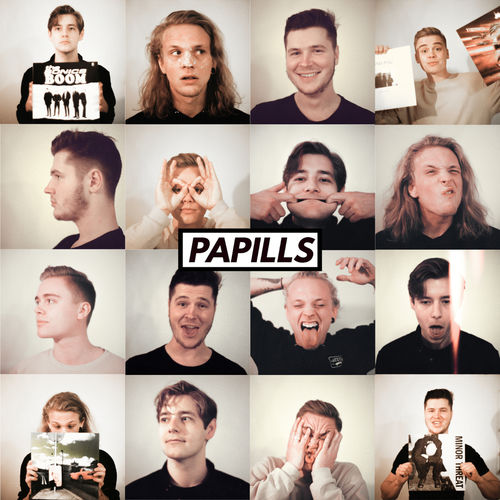 I remember a Round Table thing three years or so ago when five reviewers were brought together to discuss the future of Power Pop and Pop Rock scene. One of the discussion points was where was the current centre of Guitar Pop and without hesitation, all five of us said Sweden.

The country never fails to surprise with its regular offering of new Pop Rock and that brings us to Papills. The Vaxjo quartet offer up a debut album of jaunty summer pop and as with all great Guitar Pop, the depth is gradually revealed after repeated listens.

In the recent IDHAS Interview, Aaron from The Sunchymes eloquently explained how much harder it is to write upbeat chirpy songs. Papills effortlessly offer up ten of them and the pace only slows on the last two. I'm reminded of the great waves of Pop Rock in the last four decades.

The essence essentially is 80's Pop, but encompasses the likes of New Wave and the poppier end of Brit Pop. Think Squeeze, Deacon Blue, Wah, The Supernaturals and The Bluetones. Vocal wise, I'm often reminded of a more concise Pete Wylie.


Those first eight songs offer up some splendid feel good gems, all delivered sharpish and melodically. Too Hot For May is very Glasgow 86, All The Same treads heavily on Merseybeat and The Morning View is Wonderful Power Pop.

More than once, The Housemartins spring to mind, in style and feel, if not lyrically. What To Call It is Wylie to a tee whilst Happy Fish is like a sped up Dodgy and Played is very much in The Vapors territory. There's even time for a big anthemic finish with the excellent It's Getting Old which is Northern Uproar to a tee.

Too Hot For May is a real feel good album. We used to gear far more of this type of stuff than we do these days, which is a crying shame as we need reminding of Summer far more than we are. This is top notch and highly recommended.

You can listen and buy the albums from the links here. The whole album can be listened to on You Tube here.

Email ThisBlogThis!Share to TwitterShare to FacebookShare to Pinterest
Labels: Papills