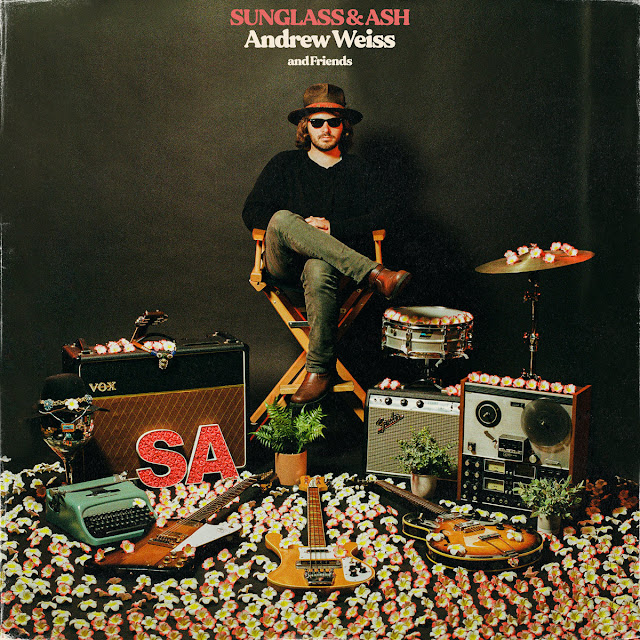 Andrew Weiss doesn't half get a lot of labels. Americana, Laurel Canyon, Power Pop, to name just three. The answer is probably that he is all of these things and similarly none. Perhaps people should just forget about genres and sit back and enjoy the excellence on show.

Sunglass & Ash is only really Americana when Weiss picks up the acoustic guitar and some of those songs are more Singer Songwriter Pop. Laurel Canyon wise, maybe the odd time there is an Eagles before the coke feel, but again the Pop is more pronounced. When he does Power Pop, it is all encompassing, could be Badfinger, could be Jangle Pop or could be something entirely different.

So let's settle on Pop Rock, but not any old Pop Rock. There is really feeling, sentiment and meaning in the lyrics revealing quite an observer, certainly not someone who wants to sing about how great the sun is. All this variety is his strength.

I take three songs as examples of the variety. Tommy's Teardrops is great Jangle Guitar Power Pop, Carolina is wonderful Piano Pop with big harmonies and A Beginners Guide To Being Famous is great modern pop, think Williams / Chambers that really should be grabbed by the people behind some upcoming young "popstar".

Ballad Of The TV Housewife (1950+) is mesmerising a country twang, a petty drawl and much more. Shot In The Dark is great 70s Piano Pop, something that Weiss excels at and Never There is a twangy, let's do the show right here, shuffle. If you want Laurel Canyon, here's You Had To Be There.

Then there is Stone Washed which races along, a little Nick Piunti in feel and sound, it is built around a cracking riff. The big closer is Backstage Bella / Italian Ice, a real story of a song, a little bit solo Henley, but way better than that.

24 songs is a lot of songs (it is a double album), but the quality rarely drops and the album never ever outstays its welcome. In fact the 102 minutes fly by. Many used to do this sort of album, few do now and those that do come nowhere near the quality of this excellent release.

You can listen to and buy the album here. You can find out more about Andrew Weiss here.

Posted by Anything Should Happen at 20:29