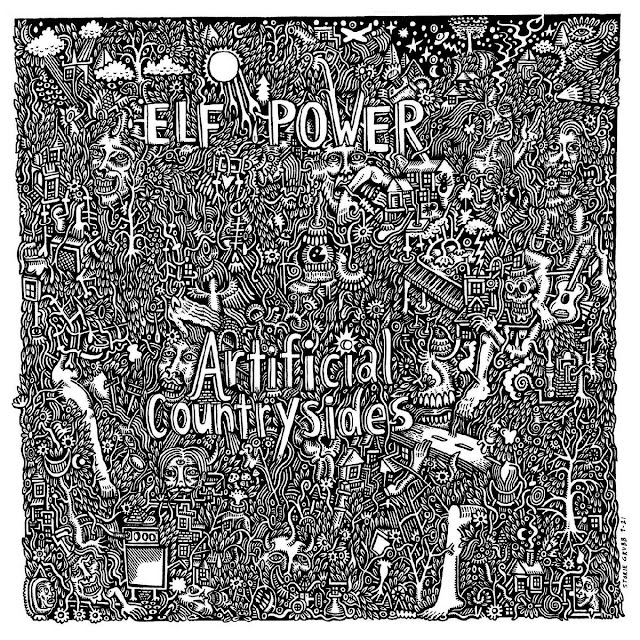 There are few bands that sound like Elf Power. Incredibly modern, yet able to remind you of days gone by. A mixture of the traditional and digital. Wonderfully inventive, yet never losing sight of the hook. They inhabit a world of their own, a world invented by themselves that has sounds coming from everywhere.

Completely unexpected musical interludes and a feeling that they have raided the music instrument cupboard. Riffs are plentiful, but completely out of the ordinary. Andrew Reiger's lyrics give the impression of incredible depth, yet could easily be stream of consciousness.

They come under the banner of Psychedelic Folk,  but there is way way more to them than that. Pop Rock springs out as does 80s Synth Pop. The arrangements are awesome, but they have had time to get everything right. This is the 15th album from the Athens, Georgia quartet and their first for Yep Roc.

They are an unexpected signing from the label, very different to the usual fayre, but hopefully this will give the band the boost that they fully deserve. You can also tell that Elf Power are part of the Elephant 6 Collective, they fit beautifully there.

The lyrical and instrument cleverness never detracts from the variety. Clean Clothes could be The Buggles,  The solo on Floods reveals a much a rockier influence. Dark Rays is splendidly melancholic and Constantly Touching could be Tyrannosaurus Rex. Just wait for the short solo on Metal House.

Undigested Parts is an awesome opener. a little Glam Rock, a little Psych and at times a bit Bates Motel meets Sparks. Artificial Countrysides is not your usual listen, but it is equally captivating and awe inspiring. A real triumph!

Posted by Anything Should Happen at 16:36