Maple Mars - Someone's Got To Listen 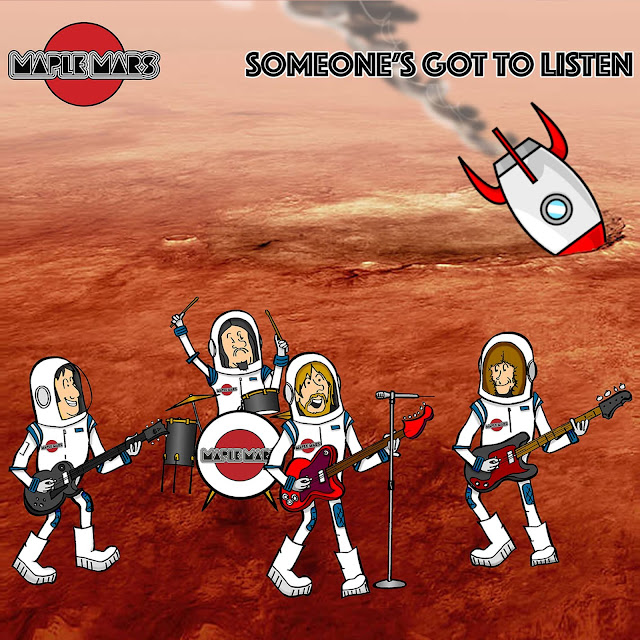 The return of Maple Mars was flagged up a while ago and I've been growing more and more impatient. The band's back catalogue is second to none and 12 years after Galaxyland, the fifth album is finally released and it couldn't come at a better time.

The year got off to a great start, but the past six months has seen the mood change. Pop Rock has been crying out for a stellar release. It is a scene that just seems a bit unmotivated lately. Writers are writing less, moaning seems to be the default mode and the days of Radio have shattered in to a thousand Internet Stations that are the good, the bad and the ugly.

It is easy to blame streaming and radio, but to take that on, you have to have the quality and Pop Rock and Power Pop just seems to want to talk about the old (again). This is that quality, an album that should be played on CD and Vinyl.

Downloads are fine for your ipod and streaming is convenient but at times does no justice to an album's production, dragging sound down to a lowest common denominator. Not only do you want to hear the quality of this album, you want to revel in it.

My biggest concern was that Someone's Got To Listen wouldn't live up to my expectations. There seems a little less Psych Pop than days gone by and far more steps towards Classic Rock, but the variety is outstanding.

A song like Anchors Away is big Rock, not a million miles away from Rush at their poppiest and Silvercraft stands even more of a comparison, it could easily appear on Hold Your Fire. It is an absolute monster of a song.

Crooked Smile channels 70s Yacht Rock and Teenage Dream heads towards big American AOR with matching Guitar Solos. Someone Take The Wheel is instrumentally chaotic, it isn't any one thing in particular, but splendid at everything it is and even a tad Psych Pop.

I mentioned in the previous album review that I was disappointed with the lack of choruses, well here you can't move for them. But for all the pace on show here, the stand out is a slower affair that is truly West Coast. Goodbye California has a hook and harmonies that will floor you.

Beautifully played, beautifully produced, I Don't Hear A Single may have already found its Album Of The Year. The only bemusing thing is that I don't see hundreds of reviews around. The IDHAS coverage doesn't end here. The popular Mick Dillingham Interviews Series features a planned lengthy career defining interview with Rick Hromadka in August.

You can listen to and buy the album here. It is available on Vinyl, CD and as a download. You can find out more about Maple Mars here.

Posted by Anything Should Happen at 22:03