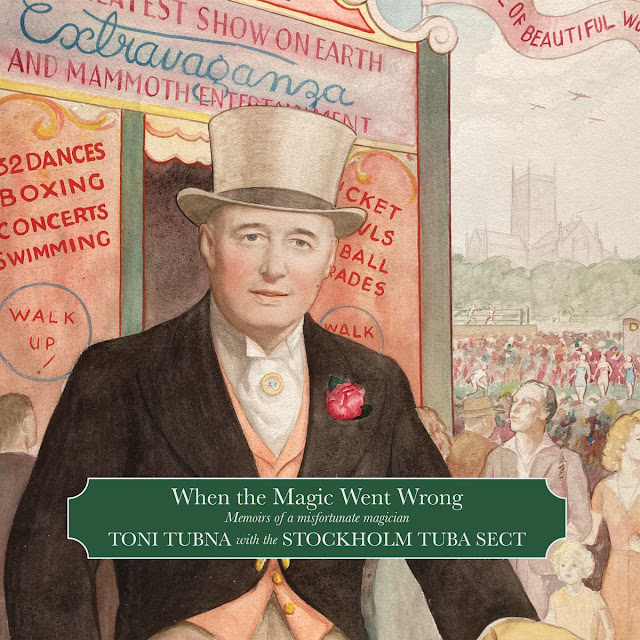 I have The John Sally Ride's John Dunbar to thank for recommending this. John correctly describes it as the sort of album that Martin Newell should make and I feel a little guilty, as I've long been a fan of Folkstone's Ian Button through his many adventures, but I had no idea he was up to this.

Ex Death In Vegas and Thrashing Doves and currently Papernut Cambridge. Co- Founder of the superb Gare Du Nord Records label and Producer of Lawrence's Go-Kart Mozart, the man never stops. It was during a tour as drummer for The Catenary Wives that the story of Toni Tubna began.

I won't go into the whole story as you can read that on the Bandcamp site. Briefly, Button wrote emails to his bandmates during the tour about an ill fated magician called Toni Tubna, an anagram of his name. Those stories became a book and eventually a team up with art historian and lyricist, Scott Thomas Buckle. This album is the result.

What an album it is! Essentially a concept album, When The Magic Went Wrong is a wonderful slice of Toy Town Psych Pop mixed with Baroque Pop and Music Hall. Gentle but intriguing, at times it is Inspired Pop Music.

Clash Of Minds even treads into 60s Kinks territory. The Mayor Of Bridlington stands alone as a special song that would be lauded from the rooftops if written by Andy Partridge or Robyn Hitchcock. When The Magic Went Wrong, the opener, has an arrangement more in line with Alan Price or Peter Skellern.

This isn't a joke album, it is a quaint beautifully written and arranged affair. Having been through email, book and album, it would probably stand being a musical. A complete surprise to me, this album is getting played and played. Highly Recommended!

You can listen to and buy the album here. A reprint of the original book can also be bought here.

Posted by Anything Should Happen at 18:26