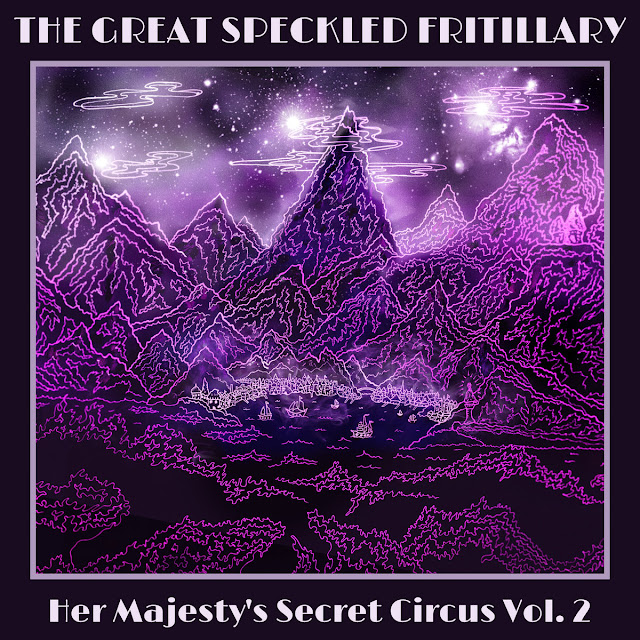 I have become absolutely fascinated by both volumes of The Great Speckled Fritillary albums. The Vancouver five piece have been brave releasing two albums on the same day. Even more so, because there is so much going on on one album that multiplying it by two is like a week's worth of dreams.

The IDHAS Review of Volume 1 is here. I have spent much of my week off from here listening to both, the albums demand that because they are so interesting and inventive, but equally baffling. There are so many twists and turns. For instance a song like Ride On starts all UK Glam Rock and ventures into Budgie territory.

Her Majesty's Secret Circus is a wonderful listen and has a Bowie 72 - 73 ish vocal. Babylonia is a surprisingly and rare straight forward affair, a restrained joint vocal ballad. The male female combination works beautifully, but even that song has to have a dramatic rocked up close.

Linger On is more 80s in sound, feel and instrumentation, but just as effective. I'm sure that the band don't wish me to pick my favourite twin, but I have come to the conclusion that this volume is my favourite, but it was close,

My reasoning is that the shorter songs are just as interesting and inventive on both, particularly the magnificent Death Is My Girlfriend here, but the longer songs are slightly more gripping. However, both albums are a tour de force. They will take repeated listens, which will be no chore, but everytime you listen to the songs you notice something new. Highly Recommended!

You can listen to and buy Volume 2 here.

Email ThisBlogThis!Share to TwitterShare to FacebookShare to Pinterest
Labels: The Great Speckled Fritillary