Dot Dash - Madman In The Rain 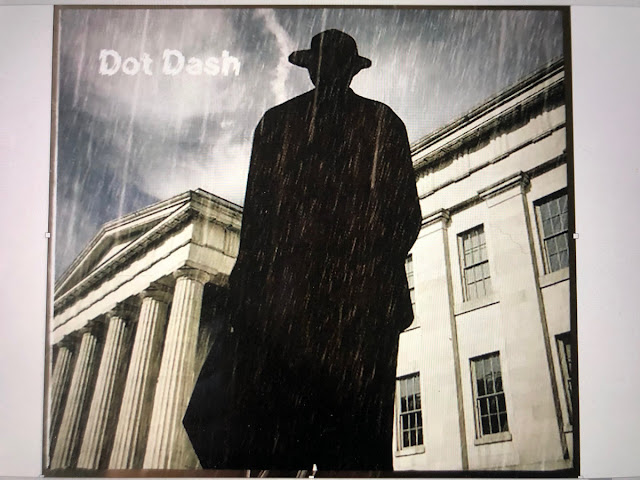 In an ongoing theme, when I posted the I Don't Hear A Single Audio Extravaganza archive episode on Mixcloud, Dot Dash opened it and I thought wow I haven't heard from them for a while. As if by magic, Hey Presto, a puff of smoke, then this appeared.

After a run of six albums in seven years resulting in the splendid Proto Retro, there has been a gap of four years to Album No 7. Proto Retro was in the IDHAS Best Albums Of The Year. The then fresh Trio format signalled a move closer to Guitar Pop and that is nailed here.

The Washington DC trio sound so British, wonderfully so. This isn't a cat sat on the mat lyrical affair though, there is real wit and depth in the words and a splendid adeptness in the sheer poptasticness of the songs.

More than once, they sound like a happier version of The Jam, a similar trio beat without the venom. However, the opener, Forever Far Out, they are very prime time Dodgy, particularly with the harmonies. Yet Trip Over Clouds is a wonderful slice of 60s Group Pop.

Saints / Pharaohs steps into 80s Glasgow Indie and Lonesome Sound is really close to Merseybeat. Dead Gone mirrors The Housemartins and Wokeupdreaming reveals Jangling can be moody, an unusual approach that works so well.

Trip Over Clouds is a fine song with a driving beat that edges towards Psych Pop. Animal Stone is built on a hypnotic riff and some fantastic Farfisa Organ. Instrumentally and arrangement wise, it may be the best song on the album.

Tense And Nervous is what you might now call a Dot Dash template song, along the lines of Unfair Weather on Proto Retro, it is a fantastic place to start. Space Junk, Satellites brings that latter day Jam comparison and then there is the title track.

Madman In The Rain is simply Top Notch, magnificently melancholic with a weeping Guitar Song. Unusually with the album, when choosing the three songs to embed that might most appeal to listeners, I could choose any of the 12 songs on display.

I seldom hear a trio so in sync, rhythmically, instrumentally and vocally. There are few bands that perform such jaunty pop and are able to offer up unusual arrangements and lyrical depth. They also couldn't be on a better label than The Beautiful Music. To say that the album would be Highly Recommended wouldn't praise it enough.

You can listen to and buy the album here. You can also buy it from The Beautiful Music label here.

Posted by Anything Should Happen at 13:13