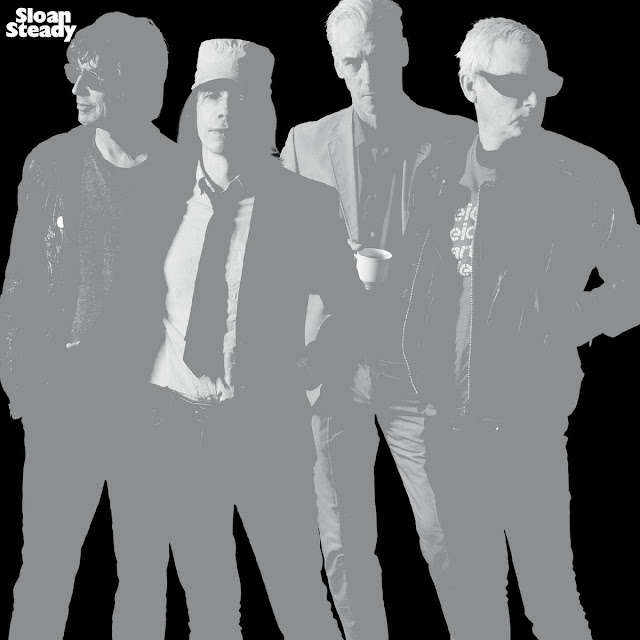 During a conversation a couple of nights ago, I was asked if I'd be covering the new Sloan album. The answer at the time was no. I am and have always been a massive fan, but the I Don't Hear A Single remit has always been to cover the new and the underappreciated. Sloan are neither.

As I thought more about it during the following days, I felt less and less sure. Sloan should be acknowledged for their influence and Steady is a top notch album. There's also a feeling that the band are close to the last man standing in the 90s Power Pop and Pop Rock revival that I like to affectionately label the Not Lame Years.

The Canadian quartet are in an envious position material wise, four songwriters who take the lead vocal on their own songs offers great variety and Steady, as on all of their albums, goes far beyond the Power Pop label that sometimes is unfairly applied.

This is Guitar Pop in all its different stripes and the band have broken out of their big fish in a smaller pond reputation and deserve a far wider audience. They are the sum of the parts, you feel the band wouldn't continue if a member left. Like minded individuals that aren't in each others pockets.

Sloan are beyond Power Pop with the exception of maybe Jay Ferguson whose writing is closest. One of his three songs here is the excellent Dream It All Over Again which has many of the traits, but is equally UK Glam Rock with its Guitar Solo and Handclaps.

Chris Murphy is generally the most active member in and out of Sloan and here he adds four songs. Human Nature is magnificent Badfinger Pop Rock with just a hint of Toytown whilst I Dream Of Sleep is jaunty Americana.

Patrick Pentland offers up three songs. Scratch The Surface is a little more sleazy New Wave than the rest of the songs on show. But Simply Leaving is a real weeper with a Glenn Tilbrook like verse and a more AOR chorus.

Andrew Scott gives up two songs and offers a more earthy approach. There's a wonderful sleaze to his drawl on Close Encounters and Panic On Runnymede is the nearest to straight out Rock that Sloan get, almost Psychedelic at times.

Sloan are the great survivors of Pop Rock. Outstanding in what they do and although you sometimes know what you are gonna get, they never ever disappoint. They cross genres without ever losing their trademark melodic joy. They say variety is the spice of life and there is plenty here to wish an even higher following for them. Tell Your Friends, you know they'll be hooked.

You can listen to and buy the album here. You can find out more about Sloan here.

Posted by Anything Should Happen at 19:58

Email ThisBlogThis!Share to TwitterShare to FacebookShare to Pinterest
Labels: Sloan