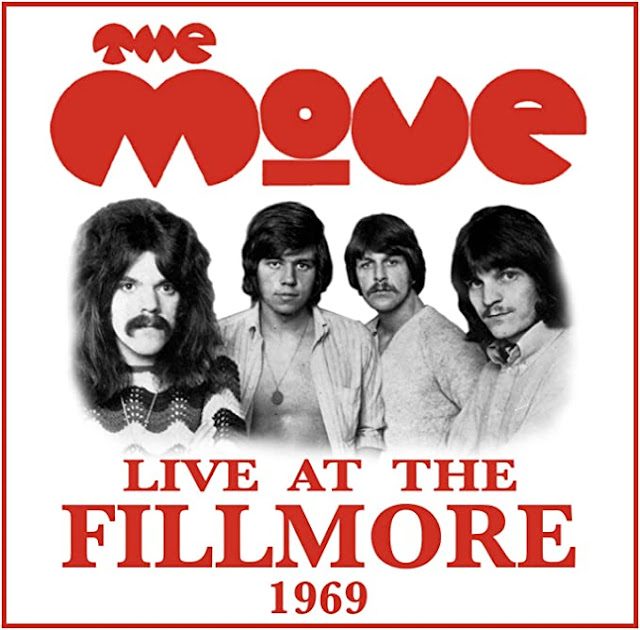 I spend most of my time writing about the new, but whilst being under pressure to tidy up the music room, I pulled out this and it brought back so many memories that I can't stop playing it. The set is still available at a really decent price on CD and download and you can also find people selling the 3LP version for around £27.Armed with a Record Token for my Birthday, one of the first three albums that I bought under my own steam was an MFP collection of The Move. I'd bought it on the strength of the three minute singles that I'd heard, but my eyes were opened by the much longer songs.

The band's second album, Shazam was so different to the debut, it was like two different bands. It was only recorded post these shows and there was such a lack of new Roy Wood material for it, that the album's six songs contained three covers and so it became more of a mirror of the band's live set. With such a lack of new material for the album, it is surprising that the album turned out so splendidly. It is many Move fans favourite album and I can understand why, although the following Looking On remains my favourite and is in my Top 10 albums of all time.

1969 was a tortuous year for the band, having already lost Ace Kefford the previous year due to his drug problems, Trevor Burton left having become disenchanted with the commercial direction of the band culminating in Blackberry Way, a song he hated. Even bigger tensions existed between Roy Wood and Carl Wayne. Wood had become tired of touring the Cabaret circuit and wanted to move the band into a heavier direction. Wayne was happiest playing the songs from the debut album on the circuit. Wayne left before the album was released and moved into cabaret allowing Jeff Lynne to join after being asked for the second time.

The Fillmore album reveals how heavy the band had become musically and is an absolute revelation. The Wood-Wayne-Bevan-Price were astonishingly great. Rick Price had replaced Trevor Burton and eventually followed Roy Wood into Wizzard. On their debut American adventures, The Move supported Joe Cocker And The Grease Band and Little Richard for four shows at The Fillmore on October 16 - 19. The recordings were gathered by Carl Wayne who set out to restore the recordings in 2003, but his untimely death the following year meant that the project wasn't. The Tapes were restored and remastered for this release.

The nine song set contains three Wood originals, a mind blowing version of the magnificent Cherry Blossom Clinic Revisited, Hello Susie and a 10 minute version of I Can Hear The Grass Grow. The covers are inspired though including two Todd Rundgren Nazz compositions, Open My Eyes and a 15 minute Under The Ice. Tom Paxton's Don't Make My Baby Blue is rocked up Shazam style, Fields Of People which was originally a 3 minute single for Ars Nova becomes a 14 minute Psychedelic epic. The Brill Building is raided for Goin' Back and Don't Make My Baby Blue. There is also the bonus of 11 minutes of Bev Bevan reminiscing about the 1969 US Tour.

Rounding of the set are three repeated songs from alternative nights namely Cherry Blossom Clinic Revisited, Last Thing On My Mind and Don't Make My Baby Blue There are other bootlegs around from The Move including the BBC Colour Me Pop set, but no other complete show exists. Many people will think Of The Move as a singles band or of the wonderful pop of the debut album, but this reveals them to exhilaratingly Progressive and is one hell of a listen. It also shows what a sad loss Carl Wayne was to Cabaret. Grab it whilst you still can.

You can listen to the songs on You Tube here.

Posted by Anything Should Happen at 22:30

Email ThisBlogThis!Share to TwitterShare to FacebookShare to Pinterest
Labels: The Move