The Chrysanthemums - Decoy For A Dognapper! 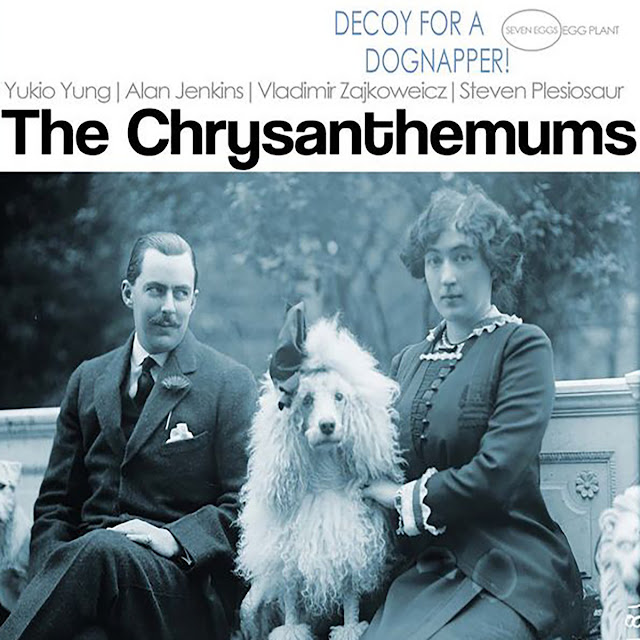 It has been a long wait for a new album from The Chrysanthemums and this one has been on the cards for a while. The reuniting of Alan Jenkins and Terry Burrows (Yukio Yung) was always going to be something more than interesting.

Burrows, in particular, has seemed to spent his time on what could be loosely described as experimental music, so I hoped that the material would still be akin to past wonders. It is and more. Back with Vladimir Zajkoweicz and Steven Plesiosaur, the quartet have fashioned up a mind blowing affair.

It is a concept album, of course it is, but an album based on the 5th episode of the original Scooby Doo series (hence the album title), you can imagine the stream of consciousness conversations that brought this thing to being. Probably a little like Mick Dillingham and I's weekly telephone catch ups.

Aided by the likes of IDHAS favourites like Robyn Gibson and Lane Steinberg, at its heart the album is 60s Pop, but that heart is engulfed by Psych Pop, Prog and err crooning. Song arrangements stray everywhere and the instruments cupboard is raided regularly and randomly.

I won't go into the history of its making as that is more than explained on the Bandcamp page, instead I'll concentrate on some of the 23 (count 'em) songs. There is plenty of the straight ahead such as the jaunty Nobody's Getting My Hair which races along in a UK Beat direction.

However, there is plenty of the unusual such as the wonderful Bonzo like cacophony of Blue Rondo A La Dog. House Of The Mastersons is a 6 minute Prog Tour De Force, but Canine Crimewave could be The Boomtown Rats doing 60s Pop.

The Great Big World And Daphne is part Glasgow 80s and part Divine Comedy with a |Guitar solo that the word lovely doesn't do justice to, The Danger Of Bat Faeces wouldn't be out of place on an album by The Dowling Poole. Trolley Girl could easily be Jarvis Cocker., vocally and lyrically.

The Bitter Tears Of Daphne Von Blake is a wondrously big 70s Pop Rock extravaganza with added Peter Skellern like Brass. Shaggy Fear Eats The Soul is splendid Toytown Psych Pop, an absolute revelation. Every song here enters different territory and everything seems to work at will.

The closer, Don't Lose Heart Daphne even tips its toe in the waters of Modern Pop, but not for too long as a riveting Guitar Solo leads into more Pulp like lyrics. There's even a Trance ending. It has been really hard just choosing four songs to embed, so I've gone for the slightly more straight ahead.

However, I would urge you to listen to the whole album. There's something for everyone and if you don't like a certain song, you'll like the next. The next time someone asks me what type of music I like, I'll recommend this, because contained within is every type of music that explains what I Don't Hear A Single covers. Simply Magnificent!

Posted by Anything Should Happen at 18:18

Email ThisBlogThis!Share to TwitterShare to FacebookShare to Pinterest
Labels: The Chrysanthemums