The Tubes - The Musikladen Concert 1981 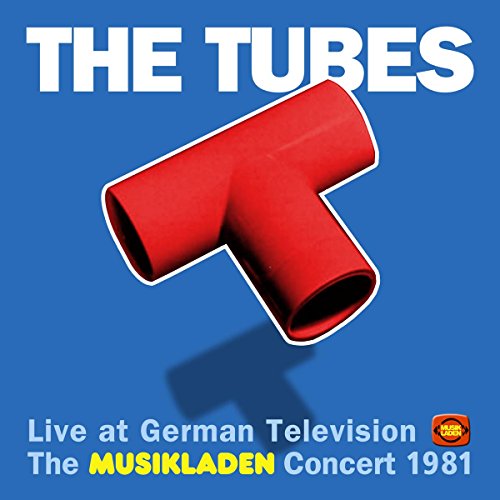 There's a spate of Live CDs  being released at the moment. A lot of it has to do with copyright control and feature Radio Broadcasts, primarily from the 70's. German TV's Rockpalast shows have always appeared and Musikladen now appears to be following the trend after previously relying on dvd compilations. This may be a good sign as there are some great shows in the archive, Blondie and Bowie to name two.

The problem with the Radio Bremen Studio shows can be two fold. They were made to be broadcast on Analogue TV and it depended on the studio engineer at the time. The problem for me as a massive Tubes fan is that I have never liked the Completion Backward Principle album.

The Tubes were garnering quite a reputation for their live show, but had not released a killer album to match it. 1979's Remote Control was that album. Todd Rundgren got hold of them and focused the commercial strength of their music. It meant him re-working the songs they came up with and it worked.

Fee Waybill wasn't over fond of this, the single, Prime Time, was intended to be a solo vocal by Re Styles. Waybill nixed this and it became a duet and the running battle between him and Styles, meant that she became history.

The TV themed album was a corker and should've took the band on to greater things. However the follow up, Suffer For Sound was rejected by A and M and off the band went to Capitol.

Completion Backward Principle marked a change of image, Men In Suits and a mickey take of Corporate Life, but it didn't seem the same band. The album was all shine and gleam with no real depth. America finally got the band, but it largely lost the UK market.

The live show seemed to forget all about the Remote Control album, only TV Is King is present here, but the theatricals were as great as ever. In fact there's a lot to be said for buying the dvd instead, a Tubes live show is not just about sound.


I realise that I look at this from a UK perspective, sorry. that's where I'm from. States readers may have a different view. The good news is that the Outside Inside album that followed recovered the band's mojo. Some of the shows from that tour are outstanding both visually and audio wise.

There's not much around from this period of The Tubes. A better show is the Live At The Greek video from the Remote Control Tour, but that's tape only. However if you are a Tubes fan, this is well worth the £12. A better bet though may be to buy the dvd and rip the audio from that.


Posted by Anything Should Happen at 14:57

Email ThisBlogThis!Share to TwitterShare to FacebookShare to Pinterest
Labels: The Tubes