Earwig - Pause For The Jets 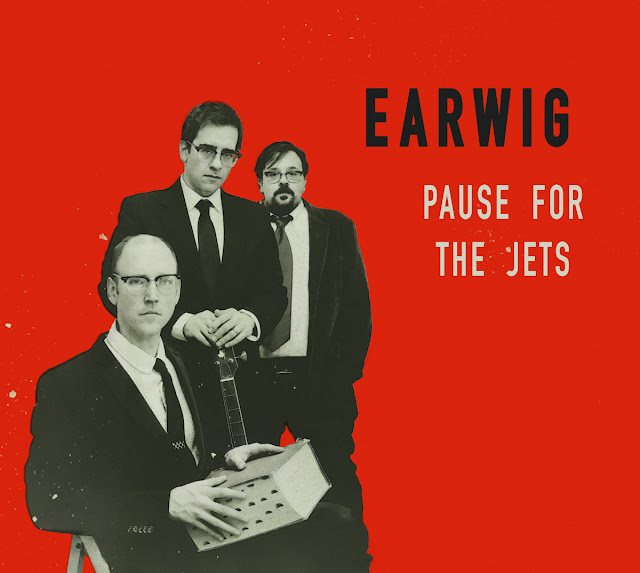 Lizard McGee's Earwig have been around for well over two decades and I've followed them intently, often bemused and confused, but always happily. They aren't always the easiest listen, but they are always interesting. There's lots of explanations behind the songs, which interests me less, to be honest I find it twaddle at times. Those songs, however, are spot on.

Explained away at times as Sci-Fi Rock, I'd disagree, I always file them with angular pop and it's the sort of thing that the ASH group love. Be that XTC, They Might Be Giants, The Sugarplastic or even Cotton Mather. All those apply as comparisons, but Earwig are a far noisier version.

There's lots of guitar and it's gripping, at times it can get psych (High Wasps), but it can also be straight ahead catchy rock (Holy Ghost Letter), the album is never less than interesting. Wasted On You is pure Power Pop. All My Sins Are Blotted Out is a grunge anthem, a great song spoilt a little by the extended first minute intro.


The riff on Shine is a cracker and the closing track is wonderfully melancholic, you could imagine it on an 80's IRS compilation. All in all, Earwig have provided their most accessible music to date.

It's a play loud album and something I've listened to a lot over the past week. It's certainly destined for the Top 10 albums of my year and the standard is really high after the past couple of month's releases. It may take you a bit of time to get it, but when you do, it will stick hard.


You can listen to and buy the album on Earwig's Bandcamp site here. Pause For The Jets can also be bought on CD and Limited Edition Vinyl here.


Posted by Anything Should Happen at 15:49

Email ThisBlogThis!Share to TwitterShare to FacebookShare to Pinterest
Labels: Earwig