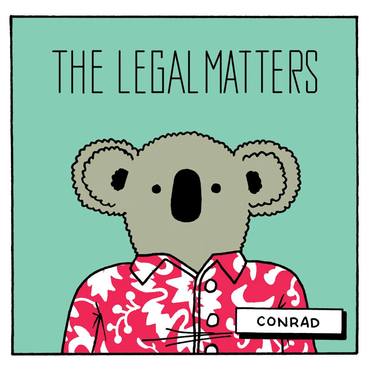 Detroit's The Legal Matters' self titled debut album was rightly celebrated by many as one of the best albums of 2014, if not THE best album and rightly so. It was refreshing to hear an album that majored so much on vocal harmony and melody.

It wasn't a major surprise considering the trio's past record, but it was still heart warming. Chris Richards, Andy Reed and Keith Klingensmith were well known around the Power Pop scene and if you get chance, you should dig out some of their individual albums. My vinyl version of Chris Richards And The Subtractions' A Smattering Of Mystery And Sound, released by Sugarbush Records, ages the needle considerably.

I was hoping for sophomore for their second release, Conrad and there is some of that. However, I've been fortunate to have the album for a fortnight or more and that's allowed greater familiarity and assessment. Normally, there wouldn't be that lead up to a review, but it's allowed me to realise the progression of the band. The Vocal harmonies are amazing, what appears simplistic isn't, the complex vocals have been lovingly crafted with great depth and every listen improves that aural experience.


Two years on and the band's trio have tripled the impact of their solo work. It is a big advancement on the debut album. The Vocals are richer and more complex, the arrangements have greater presence and feel fully formed as though you couldn't get one more improvement to each song. The songwriting and vocals are split, but the album is very much the sum of it's parts.

Ably aided by Donny Brown and Andy Dalton on Drums, the instruments are far more pronounced and it certainly feels like Guitar has been brought much more to the forefront. The album is less mellow than the debut and they show they can rock a little. The greatest example of this is Andy Reed's Short Term Memory. Everyone will have a different fave across the album, but this is mine. It's an absolute crackerjack of a song. Worth the admission alone.


There's so much to admire on Conrad. My one wish is that Lull And Bye was longer, one minute and ten seconds doesn't do justice to the wonderful harmonies. Any one of these 11 songs hit the mark and it's a little unfair to pick any out in particular. But, special mention has to go to Better Days and the aching, Pull My String. More Birds Less Bees is also a gem.

It's been a year when three albums have been waited for and in all three cases, I worried that these albums wouldn't live up to expectations. Nick Piunti and Greg Pope have already released their finest albums yet. The Legal Matters have made that a trio, this is a vocal masterpiece. It's released on 28 October and you should count down the days.

My hope is that Omnivore get behind the release big time because if ever an album deserved to break out, it's this one. Special mention should be made of the Vinyl Release. This is simply because there is a bonus download with that version which features the vocals only version of the album. That's something, I, in particular, are fascinated to hear.


You can pre-order the album here in all formats. You can find out more about the band on their website here.


Posted by Anything Should Happen at 12:44

Email ThisBlogThis!Share to TwitterShare to FacebookShare to Pinterest
Labels: The Legal Matters