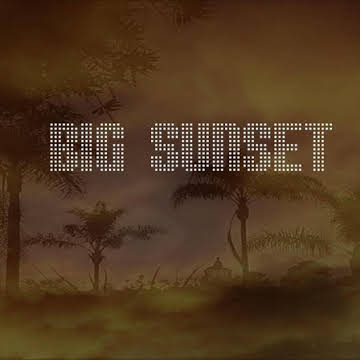 I think I know what's going on, but what always delights me more is discovering something that I had no idea about. I heard the Big Sunset album and loved it. It is a great example of a Pop Rock album that took chances.

None of the push button instrumentation is present here. You will hear Accordion, Tuba, Double Bass and Ukulele in some pretty stunning arrangements. Having said that, the stand out song is the stripped down, The Night I Was Murdered, a brooding hypnotic listen that just grips you.

Five Years in the making, this is a beautifully arranged affair. There is so much going on, but the album's themes and song structures never lose track of melody. Invisible Men comes in as a cross between Jellyfish and ELO, but with Beach Boy Harmonies and Accordion.

In all of these fine arrangements, there is very little electricity, so the big sound is even more admirable. I asked Jay Caruso about the album, how it started and came to completion. I was interested as I knew so little about the album and knew you would be too.


"I had the pleasure of recording, producing, and mixing an album for some good friends in a band called The Contestants.  In the process of recording the records I ended up contributing some extra instrumentation and vocal harmonies.  I found that I really loved the way JP Ramos wrote and that our voices worked well together.  After the album was finished, I reached out to JP to see if he wanted to write some songs together.  For me, it was a chance to explore the pop side of my musical tastes.  Both JP and I are huge Jellyfish (and associated acts) and XTC fans."

Writing together was a blast.  We would each bring fairly finished songs to the table and then take each others songs home to write our own take on them.  This process distilled a product we felt was better than our solitary vision had brought to the table.  As we continued to hone the songs an idea came to our minds to not play on our own album."


"If we broke out of that traditional songwriting mentality, where would these songs lead.  We were both established musicians in Portland and both had a roster of versatile friends who agreed to come to the table.  Notably was Don Schwarz, of Tales Untold - a band you simply must seek out if you have not heard, on Tuba and Todd Bayles on pretty much everything.  I had the pleasure of working with both of these guys over the years and they are both amazing."

"We did a few rehearsals with JP and I reworking parts to better fit the instrumentation then hit the studio for basic tracking.  Eventually we both caved and added our own performances back to the mix.  Drums, guitar, bass, and the occasional balloon track.  Todd was such an inspiration that we eventually asked him to just be a part of the project as a whole."

"The project was tweaked over a long period, in between works from our other projects, JP having a kid, and me taking on new responsibilities at my day job.  Ultimately I had become so close to the material that we opted to have our good friend Kevin Hahn mix the material, so we could get an objective mix.

The end product is a labour of love and an exercise in setting lofty expectations for ourselves.  We are working towards playing these songs live in a three piece setting of piano, drums, and bass with hopes of eventually creating another album in the near future.  Bigger Sunset anyone?"

I can't recommend this album highly enough. It's a cracking listen. You can buy the album at the likes of Google Play and iTunes. It's also available on Spotify and Pandora. You can buy the physical CD or download on CD Baby here. You can also listen to all the songs on You Tube by following the embedded songs above.


Posted by Anything Should Happen at 13:33