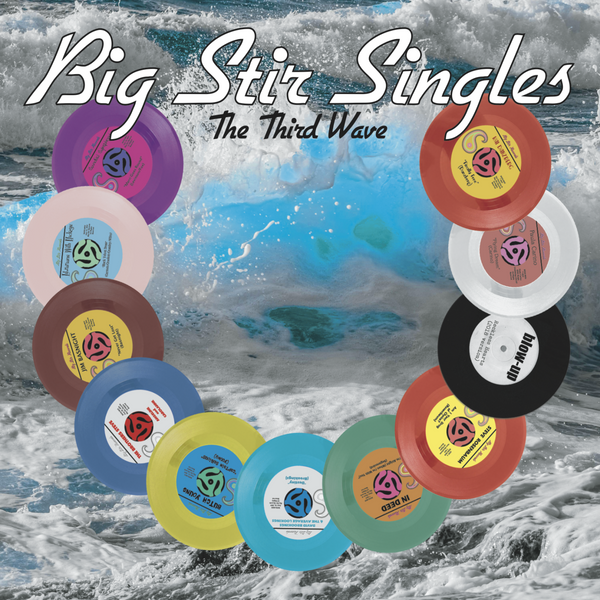 Here are my cover notes included with the Big Stir Singles : The Third Wave release. You can buy it here.

The Big Stir story continues apace and it’s delightful to see. It’s hard to believe that it has only been around for a few years, because it has created such a buzz and is fast becoming dominant in what it does. Big Stir has grabbed a Pop Rock scene that was fractured and divided, and certainly far too localised, and made it a community-led project that is rapidly becoming worldwide.

Christina Bulbenko and Rex Broome have built Big Stir from its roots as a monthly live showcase in Los Angeles to a record label with the highest of reputations. As the album releases have grown, so have those live showcases to far beyond L.A. One of the most enjoyable inventions has been the weekly Digital Singles Series, an inspired idea. You never know what to expect each Friday, but you know it’s going to be quality. What’s more there are guest appearances that add to the delight. This weekly event is not limited to the Big Stir artists, because the community encourages everyone.

The Single Series features an A and a B Side from each artist. You get both tracks for a dollar – yes, a dollar! The label has always been a big supporter of the physical format and that’s why you have me blabbing on. This is the third collection of the singles and you can hear the quality. Eleven Singles form the third collection of Big Stir Singles.

There’s plenty here for everyone. In Deed’s Guitar driven excellence, David Brookings' jangle, and pop sensation Kai Danzberg. Psych pop is well represented too with the Toybox sounds of Sundial Symphony and the Laurel Canyon twang of Librarians With Hickeys. It’s great to hear the Tsar boys back as The Brothers Steve and Jim Basnight remains one of the most underrated singer-songwriters around. That’s not to forget fantastic contributions from Butch Young, Paula Carino, Steve Rosenbaum and Blow Up.

The most interesting thing is that these 22 songs stand up as a great Pop Rock album. The collection is diverse, the variety is exceptional, but you wouldn’t necessarily think of The Third Wave as a bunch of singles. That point, probably, explains Big Stir more than any other. It’s a collective based on Melody. I won’t be the first to tell you this, but I’m still gonna say it. Big Stir are taking over the world.

Posted by Anything Should Happen at 17:13