Dropkick - The Best Of Dropkick 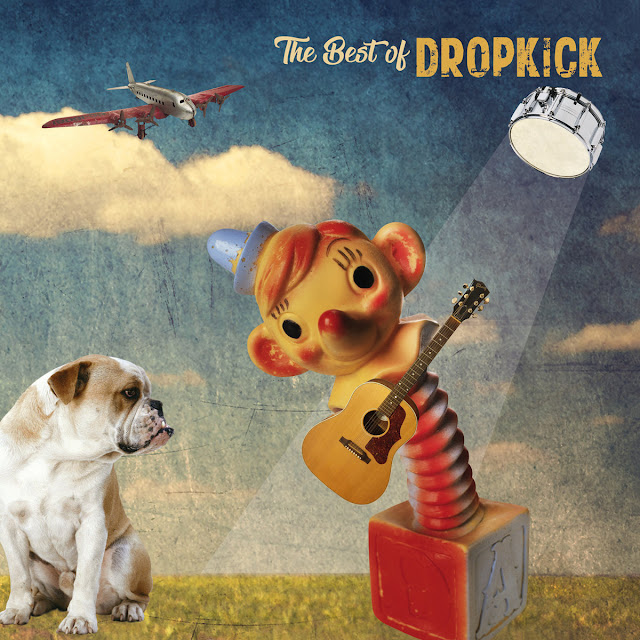 I have an apology to make and I do so profusely. I've taken Dropkick for granted. I've been listening to them for most of their two decade career through 14 albums. Every album delights, yet in my Pop Rock bubble, I just assume that everyone knows them.
So it has taken this Best Of to give me a good shaking and make me realise that I Don't Hear A Single's audience has expanded. I should also remember that you shouldn't stop mentioning a band just because every album is great. Here is a great chance for newcomers to fill their boots and long time fans to enjoy the Vinyl release.
The band get compared to Teenage Fanclub a lot, but doesn't every Scottish band that plugs in a Guitar. There are obvious comparisons, but truth be known Teenage Fanclub have got much nearer to Dropkick over the period. There is a lot here in common with the West Coast Jangling of The Byrds, no bad thing when it is done so well, too often it isn't.
When the pace picks up on songs, there is a similarity to Tom Petty. When they slow down, it is more Neil Finn and acoustically, Dropkick become far more Americana. However default is 12 strings Jangle Pop Heaven and that is when the band are at the best.
Those slower songs offer up some splendid pop, best represented by the likes of I Wish I Knew and Come Home. Don't Dream Of California is akin to The Explorers Club harmony wise and Nowhere Girl is a top notch Country offering.
I am also delighted to find Obvious is included. My favourite Dropkick song and I'm delighted that the album is getting a 15th Anniversary Edition in May. 30 songs is a lot of Dropkick for first time buyers, but with an instant collection, you will want to delve further into the Dropkick Back Catalogue. You won't be disappointed.

You can listen to and buy the album here. It is available as a Sugarbush Vinyl 2LP Edition which also includes a 2 CD set including 20 extra tracks. The CD Version has 27 tracks due to format constraints. You can also buy the Vinyl directly from Sugarbush here.

Posted by Anything Should Happen at 21:46

Email ThisBlogThis!Share to TwitterShare to FacebookShare to Pinterest
Labels: Dropkick