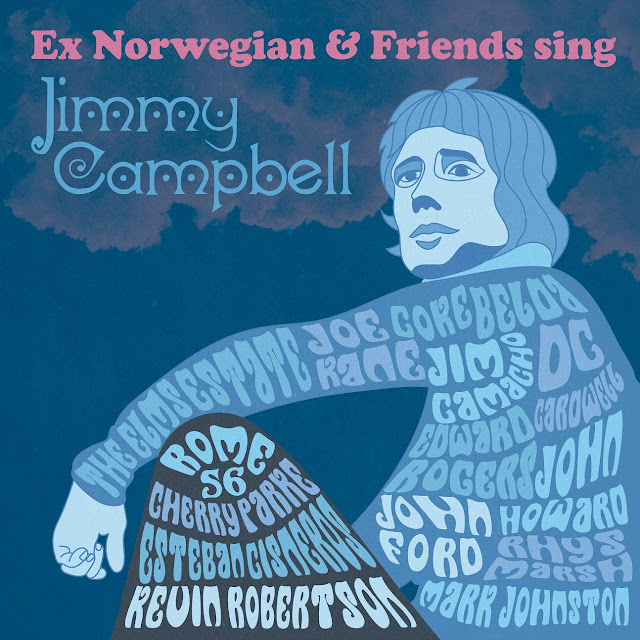 Many of you know of my aversion to most Tribute Albums. For most subjects, I just think what's the point? So let's get this straight, this album stands up in its own right. To be honest, most people won't have heard one Jimmy Campbell song, Those that have will be delighted with both the faithful versions and the alternative arrangements. The production, as with all Ex Norwegian albums, is absolutely spot on and brings a slightly more modern feel to the gems.

The musical world is littered with lost talents and Jimmy Campbell is the classic example of such. A magnificent songwriter, lauded by his peers, capable of extraordinary songs with  a depth that always managed a chorus hook. Privately, he shunned promotion and battled with shyness and vulnerability. His music sold little despite being streets ahead of many of his competitors. He also hated the music business with a passion.

So for an artist who was so comfortable moving between Pop Rock and Psych Pop, it seems more than fitting that a similarly modern example of such should take this offering on and who better than Ex Norwegian. The band could easily do this alone, but the inspired idea of adding a different lead singer to each song offers even more variety and impact. It is no surprise that one of the finest albums of all time, Rockin' Horse's Yes It Is, provides 5 of these 14 songs.

That Billy Kinsley and Jimmy Campbell collaboration always promised gold dust and it delivered. The other nine songs divide easily into the Pop love songs and the storming Psych Pop. Whilst a lot of attention will rightly focus on the Yes It Is title track, The Poppermost's Joe Kane does a fantastic version of it, this is just an example of how commercial Campbell could be. It is possibly his most accessible song, although Don't You Ever Think I Cry comes very close.

John Ford selects the poptastic Missing Kissing Me, a great if slightly unexpected choice and Edward Rogers goes for the splendid Psych Pop of You'll Break My Heart In Two. Psych Pop can be joyous as proven by The Elms Estate on Stayed Out Late Last Night. But the real masterpiece is Half Baked, my favourite Jimmy Campbell song and Rhys Marsh brings an outstanding version. Our very own Kevin Robertson adds a top notch Loving You Is All I Do. Any of these 14 songs is worthy of mention, but I'll close with two of the more unusual versions.

Coke Belda's Countrified take on Forever Grateful and John Howard very nearly steals the show with a simply stunning Baby Walk Out With Your Darling Man, so daringly beautiful. Choosing three songs to embed is really difficult, so I suggest that you go to Bandcamp and listen to the whole thing and then buy it. The only glaring omission here is Michaelangelo, perhaps Ex Norwegian can offer their version of it in future times Roger! This album may very well be the best thing that I've heard this year, it sounds like a new album.

You can listen to and buy the album here and also buy it here.

Posted by Anything Should Happen at 12:19