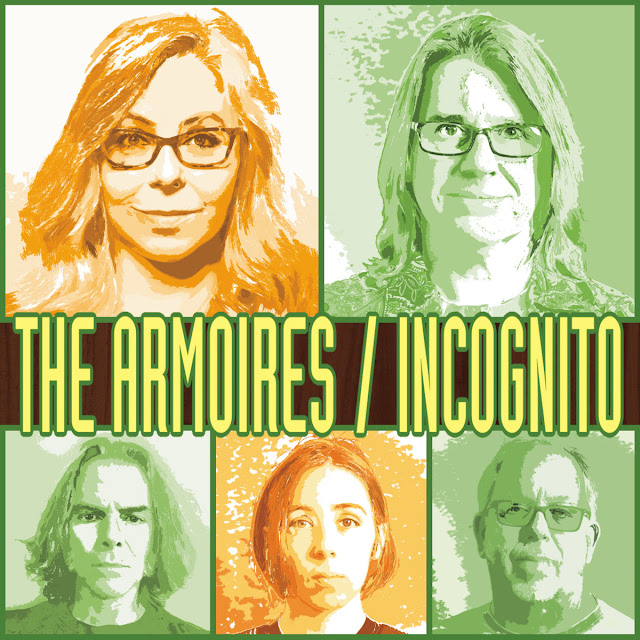 Some bands have used the last 12 months to do nothing, others to moan about everything and too many have got their Acoustic Guitars out and added a few Beatles covers to the groaning weight out there. The Armoires turned what was initially a wheeze into one of the best albums that I've heard in a long time, showing that where there is a will, there is a way. Many of you know of my connection with the Big Stir label and I'm delighted to see how big it has become. I can reveal now that I had one regret is that The Armoires previous album, Zibaldone, got lost in all the Big Stir activity. It is a cracking album and hopefully people will discover it with all the attention that this current masterpiece is getting. It was in the IDHAS Top 10 albums of 2019.

Rex and Christina were so busy with the label that their band took second place to what was happening with Big Stir. Two things happened to change all that. Firstly John Borack joined on Drums and it released a new found vigour in The Armoires. It was as though they began to take recording seriously again. Secondly, I remember the conversations with Rex as Paris 1919 was about to released. The smirks and sniggers were many as the ruse to release Digital Singles under a different pseudonym was planned. What gobsmacked me was what a fantastic job they made of the cover. It went on from there with continued single releases in different genres under different names.

From there on in those singles took on a life of their own. The Big Stir label artists got involved as did other labels. Having recorded three or four covers, the band revisited their archive, discovering songs that they had never finished due to them supposedly not fitting The Armoires' template and then new songs were added. The secret continued and the band decided to reveal that all these way out singles were them by releasing an album on April 1st collating their adventures. I was initially a bit concerned, because I had heard all these as individual singles. The thought of an album didn't necessarily fill me with glee. I thought all of this stuff has already been released.

It was only listening to the album complete that I realised how wrong I was. The result is unbelievably great. This is a proper album, a revelation. It threads together wonderfully and reveals what a cracking band The Armoires are. This album will be deservedly played for years to come. I deliberately held back my review because I felt a bit too close to it. I wanted to see other opinions and thankfully my thoughts have been endorsed by the wonderful reviews that Incognito is getting. Not only is it a splendid album that is packed with variety, it is also a rare thing. An album that you listen to from start to finish and who would have thought that from a collection of singles.

The cover of John Cale's Paris 1919 remains my favourite here. Not because it was the thing that started this off, but because it is an absolute joy of a song. So much is packed into its nigh on four minutes. It sets you off for the joy that is to follow. The wondrous Psych Pop of I Say We Take Off And Nuke The Site From Orbit, the doggone Country ache of Shame And Bourbon and the wonderfully inventive confusing brilliance of Ghost Of Fall Singer In Depopulated Griefscape. All very different, all equally great.

Christina goes all Seekers on Magenta Moon and Rex leads on an ace cover of one of my favourite summer songs, Yellow River and Andy Gibb's Words And Music comes over all Abba. Awkward City Limits goes all 80's with a twist of Reggae bursting to escape. The other song that I have to mention is the band's version of The Night I Heard A Scream for the Futureman Records 20/20 Tribute album. Initially released as a single for Halloween, it was an inspired and unusual choice for that album.

Incognito reveals what a special band The Armoires are. They are like few other acts on Big Stir or anywhere else. More than anything else, the album reveals what a varied roster that the label has. But more importantly, how wrong we were to sit The Armoires in a corner.

You can listen to and buy the album here and here.

Posted by Anything Should Happen at 19:06

Email ThisBlogThis!Share to TwitterShare to FacebookShare to Pinterest
Labels: Big Stir, The Armoires