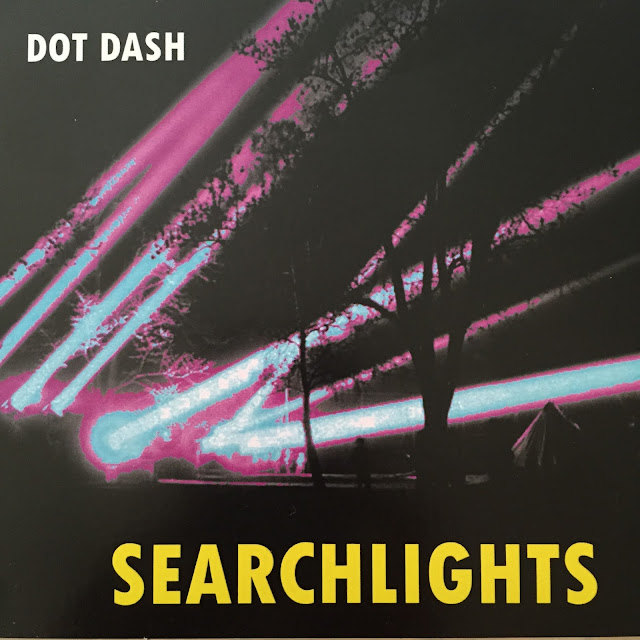 Although Washington DC's Dot Dash are very much known for their excellent Garage Rock, they've supported quite a few Power Pop Legends and with Searchlights you can see why. Their fifth album in five years feels far more like The Replacements if they were a UK New Wave Band.

Don't get me wrong, they've not ditched Garage Rock, there's enough here and I wouldn't want them to, it's what has given them the live reputation that they have. However, the riffs are more frequent, it's not all a hundred miles an hour and you get more time to appreciate the quality of the songs.

The Infinite is the best example, those Bass Lines and Riffs are straight out of the Power Pop Book Of Essential Songs, but there's far more of an edge and lyrically it's not my girl has left me and I'm sad.

Summer Light is wonderfully moody with it's chatty verse, Holly Garland has a riff that would be at home on an album by The Vapors or even The Only Ones. Something In-Between could be prome time Jam era Weller. In fact, Hunter Bennet's Bass Playing on the whole album reminds me of Bruce Foxton. Daddy Long Legs is Dr Feelgood to a tee.

The only time the album lets up is the closing smooch In The End. What you have here is one of the best Power Pop albums of  last year. I've known of the band for quite a while, but Searchlights has gripped me. a corker of an album  and if you get the chance to see them live, do.


You can listen to and buy the album here. Holly Garland and Woke Up Saturday Night are available as free downloads. You can also tuck in to the band's Back Catalogue.

Posted by Anything Should Happen at 16:22