I Want A Big Stir Over Here 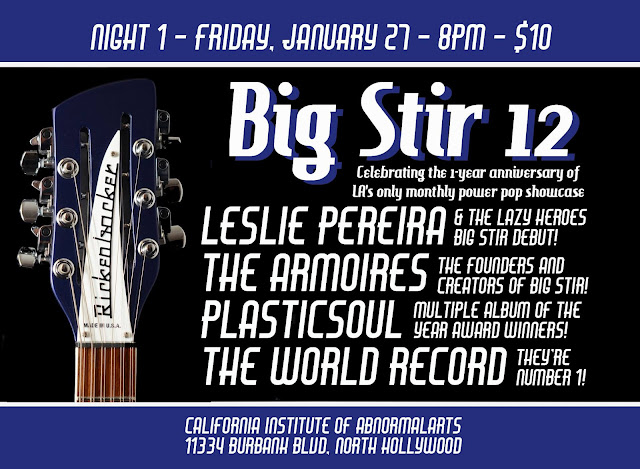 Good to be back after an extended break. Lots of reviews to get through in coming days, but my return reveals my envy of something that goes on over the water.

The Power Pop scene has never been massive over here in the UK. That's not to say that there aren't a great number of fans, they are just spread so far afield. We get IPO in Liverpool once a year and that's a great way to pick up on new bands, but when a band come over here at other times, at best we may get a London gig. There are honourable exceptions such as The Posies, but these are few,

I don't blame the bands, it is just not viable to tour the UK these days for the majority of artists we like. Record Companies used to support tours and they are inconsequential these days. Record Sales, the same.

There are some great music venues in the North West and Liverpool is thriving, but the bands don't seem to have the money to play them all. Music is largely a secondary income, if that, for most now and so main work gets in the way. The likes of James Lee's Hangar 34 in Liverpool bodes well as a venue. James has long been a supporter of the Liverpool Indie Scene and I can see that venue becoming something special.

What I'd love to see over here is a monthly night of great Power Pop / Guitar Bands at whatever venue. That's why I am so envious of Big Stir in North Hollywood. Rex Broome and Christina Bulbenko run this monthly event and as it reaches it's first anniversary, some of the artists who have appeared make me wish that I could be transported there. 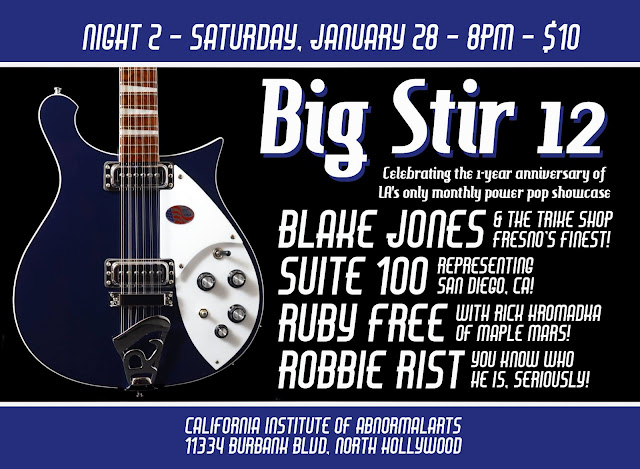 Plasticsoul, Cait Brennan, Butch Young, Fernando Perdomo, Brandon Schott, Rob Bonfiglio, Jason Berk, The Cherry Bluestorms, Blake Jones. These are names we can only dream of seeing over here. Yes we get their music, usually as downloads, but how we would wish to see them live. A Liverpool or Manchester night with a mixture of the known and local bands as a regular monthly meet up. How cool would that be?

Rex and Christina don't only organise Big Stir, they are also The Armoires and what an excellent affair that band is. I'm made even more miserable by looking at the line up for the two night First Anniversary shows on the 27th and 28th January. I've a good mind to make them stream it to me Live.

The Anniversary shows include Plasticsoul, Blake Jones And The Trike Shop, Robbie Rist, The Armoires and Rick from Maple Mars. The events are DJ'd by John Borack and I'm told David Bash will be present. All this for 10 dollars a night. Liverpool loves it's IPO, but we are greedy, me more than most. Can we not have a monthly thing too?

Well done Rex and Christina, you'll have me in tears by the end of the month.

You can find out more about Big Stir at the Facebook site here.


Posted by Anything Should Happen at 18:51

Email ThisBlogThis!Share to TwitterShare to FacebookShare to Pinterest
Labels: Big Stir, The Armoires