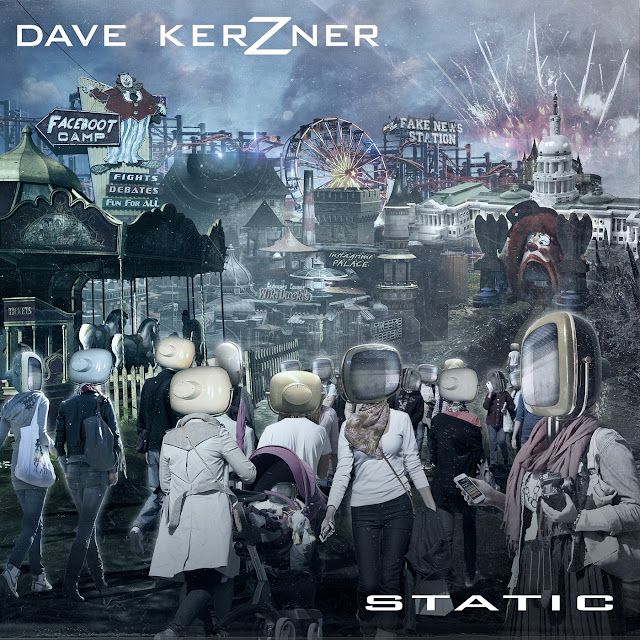 I've often said in the past that although I am known for Power Pop and Pop Rock, I have a much wider taste and a particular penchant for Prog. I'm talking King Crimson, Rush in side long mode, Gabriel era Genesis.

As for Modern Prog, I love Big Big Train, Porcupine Tree and Francis Dunnery, but I normally back away from the genre. This is because I find it over produced, kitchen sink how fast can you play rubbish. The songs are forgotten in the race to show technical dexterity.


Normally, this would be reviewed as part of The Garden Of Earthly Delights section, but it's so good that it deserves to be stand alone. Static is a corker of an album. Normally when you hear the words Rock Opera, you run as fast as your raging legs will take you. Also when you find that Dave Kerzner is a keyboard vocalist, you think capes and long long cape worn solos.

Well for those in the know, Sound In Contact's Dave Kerzner is not a bit like that. With the odd exception, such as Reckless and Statistic, the keyboards are hardly around, this is twin guitars and you'd probably not know this was a Rock Opera if I hadn't told you. Also, before you get sniffy about Prog, remember that both Dave Gregory and Colin Moulding are largely in this fold now.

For all the great arrangements and playing on show, Static is all built around Kerzer's superb voice. It has a mellow quality that rivals Jeff Lynne or Eric Stewart, but he can stretch out like a Colin Blunstone or John Wetton. This is unusual in the genre, in which vocalists line up to sound like Peter Gabriel.

Indeed, the title track could be ELO and the strength of the slower numbers such as Right Back To The Start reveals that vocal quality.  Millennium Man is very Alan Parsons Project and State Of Innocence is a wonderful harmonic ballad.

For the majority of this album, you'd label it as a great Pop Rock album. However, Prog is not forgotten as the closing The Carnival Of Life is a 15 minute Prog Masterclass, all time signature changes, just what us Proggers get off on.

Static is an exceptional album, it deserves to be listened to. You can buy it here and everywhere.

Posted by Anything Should Happen at 22:26