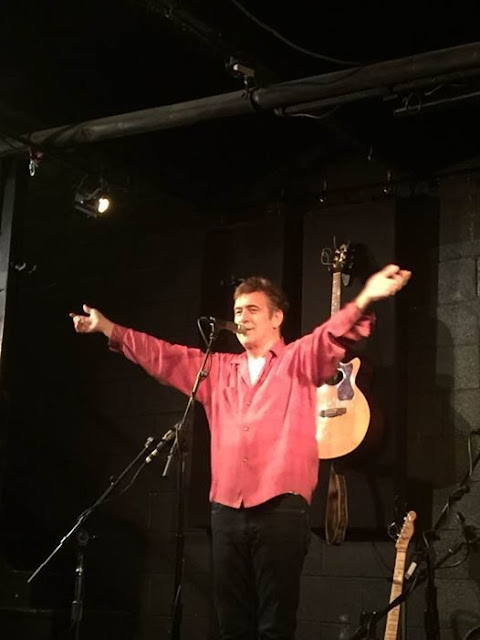 Tommy Keene is one of those artists that won't mean a lot to people outside of the Power Pop world that I inhabit, but in that world he is a God. Like so many of the Power Pop Greats, the simplicity and hooks of his songs masked his technical ability. He was an awesome guitarist and a lover of music, much of it far different from what he was noted for.

Many will know him better personally than I did, the UK and US distance ensures that, but I can only tell you about what he meant to me and mention the few conversations that we had over the past decade or so.

He never really understood how beloved he was. He'd be concerned about filling a small venue that was always gonna fill, than realising how good he was. He talked about diversifying on whatever album was next and would eventually release an album of what people wanted, great Power Pop and how we wanted it.

There was plenty of Power Pop before Tommy hit the airwaves, but I always looked at him as a godfather of the genre with Dom Mariani. I once joked that I'd love to arrange a UK Power Pop Festival with Dom and Tommy as joint headliners, he laughed and said build it and they will come.

We shared a love of Prog, Mike Oldfield and King Crimson especially and of our dogs, Crash and Coco. My conversations were only occasional, but in them, he was always charming and interested and incredibly modest. I certainly didn't know him as much as others, but he treated everyone as a friend.

On returning home from my heart scare last year, Tez posted a picture of me and Crash on my return home. Tommy was one of the first to message me with a simple You OK?

In the early 80's, post UK New Wave, I was falling out of love with music. I hated the New Romantic scene and turned to the States for motivation. It wasn't easy in those days to discover new music abroad, the one thing the internet has done has brought those fans closer together.

You had to scour the Rolling Stone or Record Collector Ads and I stumbled on the IRS scene from there developed an interest in all things Mitch Easter and in 1984, I was told about Tommy Keene. The Places That Are Gone 12 Inch, opened up a whole new world to me, this was Pop but not as I knew it. I grabbed everything thereafter.

The advent of the UK Music Monthlies and greater music coverage than the now, led to the wave of Jellyfish and Material Issue etc and then Not Lame and Kool Kat. The internet changed everything for good and bad, but you realised that many others loved the same sort of music that you did.

Power Pop is a dividing label, it always seems a hard thing to sell and a genre that loads love but few buy. There was far more to Tommy than the consistently great albums that he released. In My Anything Should Happen days, he was revered as a Rock idol. Live, he was incendiary and his Keene Brothers album with Robert Pollard remains one of my favourite albums ever.

Other musicians knew his Technical ability and he was an axe hero for the likes of Robert Pollard and Paul Westerberg. No one could match bitter sweet lyrics with big guitar hooks as well as Tommy Keene.

I rarely write pieces such as this. A simple acknowledgement is usually all I offer. However, when I look for musical heroes, Tommy is one of the few. I would not have discovered Power Pop and all the wondrous people around it without that 1984 EP. His music has never let me down and his warmth only made me admire him more.


Posted by Anything Should Happen at 15:10