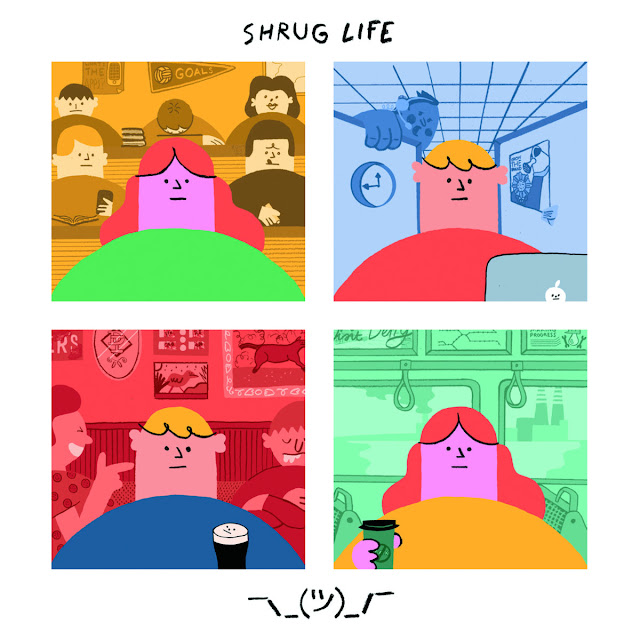 Dublin's Shrug Life are tied in with Seattle's excellent Jigsaw Records and this would appear to be a match made in heaven. Jigsaw do not get enough praise for their contribution to Guitar Pop and the world would be a much poorer place without them.

As for Shrug Life, well they are 2017's answer to The Housemartins. The same glorious lo-fi, the rapier wit about the mundane and the chirpiness of the material. The trio are just the thing in this Post Brexit Trump World. Forget about it for a bit and celebrate the every day rubbish and nonsense.

There is seriousness here though, again Paul Heaton like, the chirpiness delivers a serious view. Your Body is about Pro Choice in a Proclaimers style delivery. At Times, this wit about the mundane can be compared to Half Man Half Biscuit and there are the similar folky tones around some of the songs.

Never Bored rocks out as much as you could expect Shrug Life to and that song still returns to a calypso like rhythm. Skype Calls has a lyric that you would expect from The Bordellos or Colin's Godson.

I'm not sure what Free Bird II is meant to be, but it's wonderfully anarchic, all jangly with lo-fi budget versions of Guitar solos at either end, a sort of Pound Shop Skynyrd. The hilarious closer, Japanese Bonus Track, is a country folk summer with an almost Morrissey vibe.

This album is an absolute joy, One of the best things that I've hears all year and probably the most satisfying. Wit, lyrical depth and all done in a charming poppy manner. It's an absolute corker, well done Shrug Life.


Posted by Anything Should Happen at 15:08