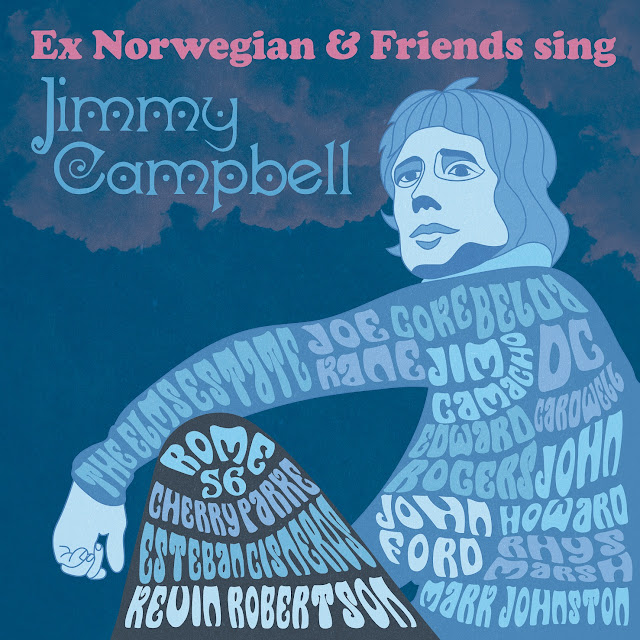 I listen to a lot of music, but it isn't often that a release is so close to my heart. Jimmy Campbell is one of the great lost songwriters, a musician who could move from pop to psych with ease. Talking of moving from Pop to Psych. Ex Norwegian are a band who do that also. As many of you know the band are a real favourite of mine. Indeed. 2018's superb No Sleep album was the I Don't Hear A Single album of the year.

Roger Houdaille is a massive fan of Jimmy's. as well as another hero of mine, Ollie Halsall. So his idea to have his band work with 14 artists from around the world to cover the great man's songs made my eyes light up.

I've been fortunate enough to have the album for a week or two and every play just sounds better and better. The idea of the album thrilled me. For it to turn out so fantastic delights me more. You can listen to these songs as though it is the first time you've heard them. For many it will be.

The album is released on April 2nd. I'll make this into a post on IDHAS tomorrow and will do a full album review nearer the release date. The Track list is below. In the meantime, an album sampler is linked below with the pre order link below the track order.

04. Don't You Ever Think I Cry feat. Jim Camacho

08. You're Spending All My Money feat. Mark Johnston

10. Baby, Walk Out With Your Darlin' Man feat. John Howard

13. When I Cross Your Path feat. Esteban Cisneros

14. Loving You Is All I Do feat. Kevin Robertson

The album is available as a CD, Vinyl LP or Download.

Posted by Anything Should Happen at 20:28