The Gold Needles - What's Tomorrow Ever Done For You (Updated) 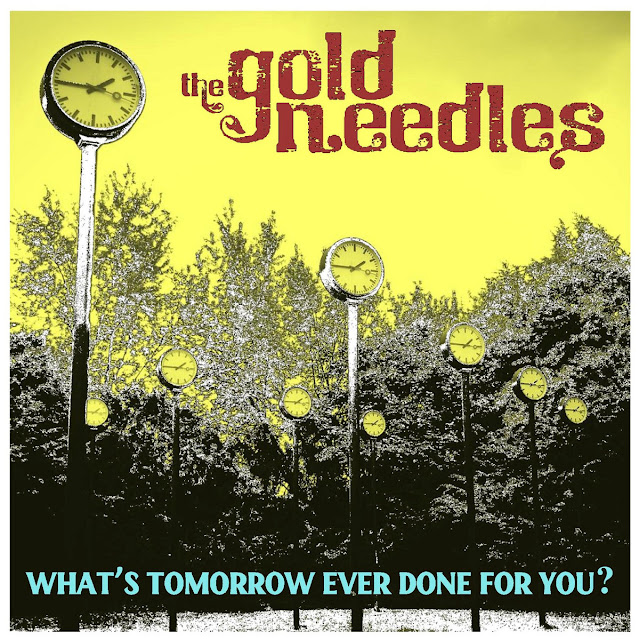 The Gold Needles are from Hull, but you really feel they should be from the West Coast Of America. It has been great to see their development on this their third album. I reviewed their first two albums on here and number three doesn't disappoint. It is also worth noting that Mark English, the keyboard player, is one of the nicest guys that you could ever be introduced to.

The band specialise in a type of Psych Pop that is very Sixties with the emphasis more on Pop. It is a brand of Psych Pop that certainly isn't Paisley Shirt, more like Fisherman's Jumper. A cross maybe between Graham Nash era Hollies and The Seekers.

That's not to give the impression that this is an album for pipe and slippers. When the band break out, they do so with an admirable urgency. Story Of My Life is a smashing slice of New Wave Power Pop and Suzie Is Sorted is 1974 UK Glam Rock at it's best whilst still having overtones of 60's Toy Town Pop in the chorus.

Dead Man's Hand verges on Blues Rock, almost Blue Oyster Cult at times and the lead single, Billy Liar is an absolute joy. The latter sums up everything that is great about The Gold Needles, it is a romp of a single, there are hooks everywhere.

Special mention must go to the wonderful mind blowing, Realm Of The Black Dog, an absolute Psych masterpiece about Depression. It could very well be the best thing that you will hear all year. The title track, I Get The Pressure and Precious Times are more in the aforementioned, laidback pop mould, all great songs, beautifully played, arranged and sung,

Three covers in a 12 song set is a lot, but The Hollies' Have You Ever Loved Somebody? is an exceptional version of a great song and more people should cover The Sound. The resulting Counting The Days is very different to what surrounds it, maybe a more modern slant. I'm not sure though that the world needs any more Beatles related covers, other bands are available.

I'm convinced that listening to this album will drive potential buyers to open their purses. What's Tomorrow Ever Done For You is a fantastic album, at its best when it explodes out. I don't see many other bands that are as consistently excellent as this lot. Highly Recommended.

You can buy the album on Vinyl, CD or as a download here.

Posted by Anything Should Happen at 17:55

Email ThisBlogThis!Share to TwitterShare to FacebookShare to Pinterest
Labels: The Gold Needles