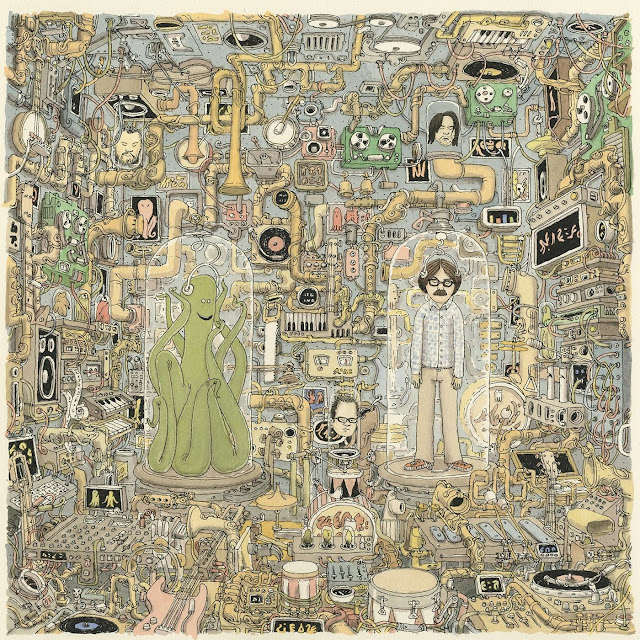 I'd grown wary of Weezer albums for what is I suspect the last decade, but certainly everything from Everything Will Be Alright In The End. That was an album that sounded really mediocre, yet the instrumental version of it was ace,
Since then, most of the albums seem to have been written for algorithms. There is the odd gem, but that's your lot. It wasn't that I wanted them to become their original college rock self depreciating selves, I just wanted to be able to like the songs, rather than end up frustrated with a musical paint by numbers.
When I heard they were working on a Guitar album in 2020, named Van Weezer, I was buoyed, not because I wanted it to be 1994 or The Green Album again, but because I like Weezer as a group that is Guitar led. Due to the pandemic that album got temporarily shelved and so the album that was largely completed before it went centre stage.
Thus we have OK Human, a pun on Radiohead's OK Computer, an album recorded with a 38 Piece Orchestra at Abbey Road Studios. I wasn't that hopeful of being wowed and the first couple of listens seemed to reinforce that opinion. Then it was though someone had turned the lights on.
This album does require repeated listens, but when you get it (and you will get it) you realise what a great Pop album it is. It is laden with hooks. Everyone at home, all with different tastes, can't get the earworms out of their head.
OK Human could be Weezer's most complete consistent album. There are better individual songs on other Weezer albums, but this is a complete listen. I'd also note that if this were an Indie Guitar album, the songs wouldn't sound half as good. If anything it is a Piano led Orchestral Pop affair.
A song like Numbers feels like it should be on one of the great late 60's Singer Songwriter Studio Sessions, Playing My Piano is great McCartney Beatles Pop. Screens is splendid Mid 70's Pop Rock. Bird With A Broken Wing could be The Explorers Club. Here Comes The Rain could be ELO in their jauntiest prime and you would expect a Jeff Lynne song to be about the rain.
Essentially, this is a slower tempo, almost ballad like. With this in mind, all the modern pop and likely singles are up front. All My Favourite Songs, Aloo Gobi and Grapes Of Wrath are absolute Pop Gems and Rivers Cuomo sounds in fine voice throughout.
Ask me in six months time, but OK Human feels like it could be renowned as one of the great Pop albums. There is layer after layer to discover. Next up, if touring is back on, will be Van Weezer and this album will feel very different, but isn't that what this band have been about for that past decade.
You can listen to all 12 songs in full here. You can buy and stream the album everywhere.
Posted by Anything Should Happen at 01:42

Email ThisBlogThis!Share to TwitterShare to FacebookShare to Pinterest
Labels: Weezer