The Young Hearts - The Modern State 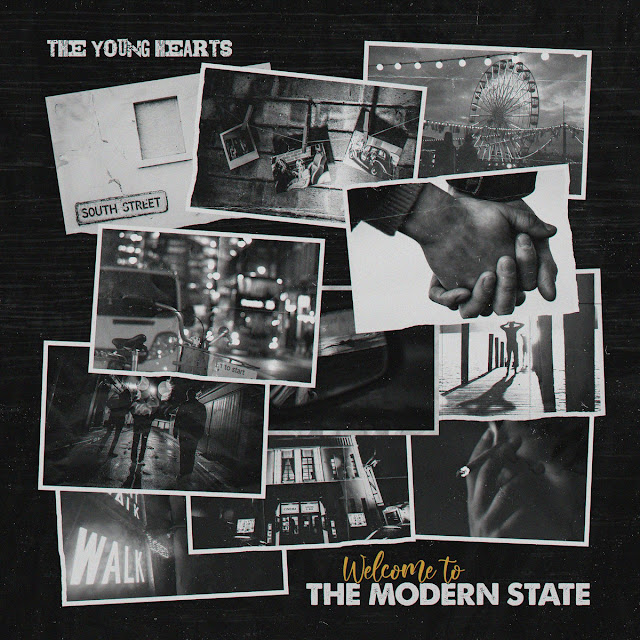 Back in late 2017, I reviewed The Young Hearts' EP, Honestly I'm Just Thinking. You can read that here. Now that the band's full length debut is with us, it is great to see that they have not lost any of the promise of that EP. It is also a chance to reflect on the mistaken impression that the older audience have of Pop Punk.

The Young Hearts are not Pop Punk. Although their roots are in it, they are still lumped in with the genre. There's also nothing wrong with that, except music fans think there is. It used to be that people saw the word Punk and ran. Now it is more than that. The genre is held back by an impression of baggy half pants and automated robotic, almost talking, singing. A thought that it is a young man's game that should not be your cup of tea. A Leave it down wiv da kidz attitude.

It is worth noting that the genre has moved on and there is not much left of it. This opinion on yoof is a misidentification. The early adopters of the genre are now approaching middle age and the scene has developed into a showcase of more every day talent. Very much as I am associated with Power Pop writing, but write little about True Power Pop these days, so Pop Punk bands are still associated with the word "Yo".

You can tell that The Young Hearts roots were in Pop Punk, but they have grown into one of the best UK Indie Guitar bands and let's face it, there are few of those about at the moment. The UK Music obsession with algorithms and preaching that the Guitar is dead is proved unfounded when you hear an album as good as this.

Here are 11 songs that are built on melodic riffs and big choruses. These four can play and do so at an almost breakneck pace. The choruses are memorable and become ear worms. Guitar solos hit the spot without, thankfully, ever being plank spanking.

If you want something slower, here's Swim, a song that threatens to break out in to something almost Celtic. Anchors is another example of suitable moodiness with a wonderful organ run. You can even get your Lighters out, if you can find them amongst the Vape Liquid collection, to the title track.

But it is that pace that suits the band best and that'll be demonstrated if live venues ever reopen. Songs such as Wild And Restless and Easy Life get those fists pumping and London is a gem of a song. The Modern State isn't a Pop Punk offering, it is a great Guitar album. Proof that the Guitar isn't dead and the UK is also about real instruments.

Posted by Anything Should Happen at 11:48

Email ThisBlogThis!Share to TwitterShare to FacebookShare to Pinterest
Labels: The Young Hearts