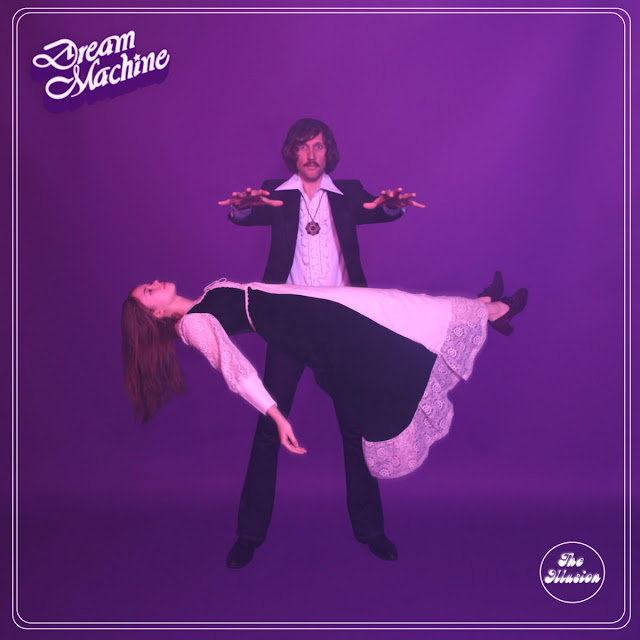 Matthew Melton is a talented guy. For 10 years, his Power Pop and Pop Rock reputation has grown and grown via Snake Flower 2, Bare Wires and most notably, Warm Soda. Warm Soda became College Rock darlings who were breaking out to a much wider audience.

Warm Soda's fourth album, released in May, suddenly became their final album. There was no touring, no promo, just an announcement that Melton was now part of Dream Machine with his wife, Doris. The sound is a marked departure.

Doris Melton is a heavy influence on Dream Machine, her keyboard playing has fashioned up a mix of Prog Rock similar to the likes of Rick Wakeman and ELP. This 70's feel is complemented by more than a nod to late 60's Psych.

Matthew Melton's pop sensibilities are still around and so amidst all this trip out stuff, there are still plenty of choruses such as on the Deep Purple esque, I Walked In The Fire with it's glam chorus. Caught In A Trap is all Classic Rock. Nothing Left's dreamy background has another great chorus hook.

The Illusion was released simultaneously with the Warm Soda album, providing confusion, but the album is splendid in what it does. In a world were Psych has become so derivative and Prog so over produced, this album hits all the right notes and sounds.

As ever with Matthew Melton, chaos seems to follow. The promo for the album included an interview that expressed the couple's views on immigration and feminism that led to them being dropped by their label, Castle Face Records. The album is now self released on Fuzz City Records. The demise of Bare Wires showed that nothing is ever simple with Melton.


One thing I've learned, over too many years to recount, is that it is best to separate the music from the musician. I've met a lot of my heroes and sometimes you wish you hadn't. Two of my greatest friends have political views that I disagree with intensely. To me it's about the music and if you get along with the artist or agree with them, that's great, but I find it best not to confuse the two.

You'll also find no Facebook presence from the band. The Meltons look upon Facebook as something that brings the worst out in people and perhaps this is a decent point. We do surround ourselves with like minded people. It's slightly different for me with what I do, but I certainly do not want to see another plate of food or someone telling someone sat next to them how much they love each other.


There is a second album planned for October which is more piano led and it would appear that Dream Machine will be a vehicle for experimentation. No mean thing. This is a great album, a listen from start to finish thing, just don't expect Warm Soda.


Posted by Anything Should Happen at 10:54