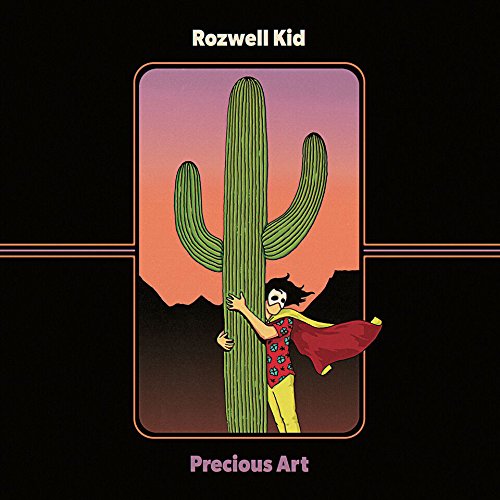 Rozwell Kid have been compared to Weezer a lot and whilst that has been a fair enough comparison, I tend to feel it holds them back slightly. Of course, there is that Nerd Rock vibe, a label, incidentally, that hasn't applied to Weezer for a long time, but that's to ignore the clever pop that Rozwell Kid offer up.

Something like Boomerang can easily be compared to Weezer, but it can also apply to the more grown up stuff of a Sugarplastic or a Verve Pipe. MadTV is such a reminder of Ben Esbach and when the band move away from this, they don't have quite the same effect. There's nothing wrong with Clever Pop, in fact it's an Art Form. The problem, as I'm sure Andy Partridge would tell you, is that it gets loads of Critical Acclaim, but far fewer Sales.

So Precious Art is full length album Number Four from the West Virginia Popsters and they've lost none of their Power Pop charm. There's lots of clever references to the more mundane things in life.The riff on UHF On DVD stands comparison with any of the hotter Power Pop Bands that you want to name, say Fountains Of Wayne.

Wish Man reminds me a lot of Tsar, even if it only does last for 55 seconds. There's a lot to be compared to the early Tsar, a young band who it felt had been around for years with their sound and references.


I'm not sure the subject of Booger will appeal to the older market who these guys should gather in, but the closer, Michael Keaton will. It's an extended almost six minutes with an extended riff ending. It works beautifully.

Jordan Hudkins has a real knack of writing about the everyday things in life and making them interesting. It certainly is a different angle to come from and it works. The most engaging songs are the likes of Wendy's Trash Can and Total Mess. The Banal subjects seem to make great songs and this is a great album. If this album had been recorded in 1994 it would be lauded by the Forty somethings now, let's hope they have the same feelings now, Precious Art certainly deserves the recognition.


Posted by Anything Should Happen at 19:38