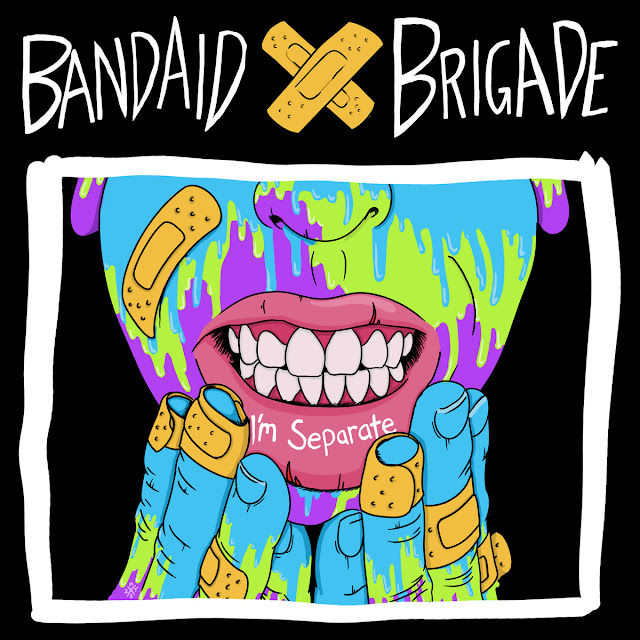 I am not going to preach again about Punk being labelled and so the bands can't play. Both Zach Quinn and Brian Wahlstrom have made their names in Hardcore Punk, the former in Pears and the latter markedly in Scorpio. The pair are joined by Paul Rucker from Armchair Martians and Chris Fogal of The Gamits.

Bandaid Brigade are not Punk, nowhere near it. This is great Pop Rock, bordering AOR and at times Modern Prog. The San Diego quartet have fashioned up an incredibly Commercial album that pushes all the right buttons at the right time.


We have a community joke that most ex Record Company people have an Arista 1975 attitude. They still act like it's 1975 and expect masses to flock to their independent releases as if music like the wheel had been reinvented. Well, Bandaid Brigade feel more 1985 and that's a compliment.

That's not to say that there isn't a versatility about them, because there is and some. The Soft Rock of Holding Steady (Sax and all) is very different to the Footloose like, Break The Grid. Attila has the feel of an AOR version of The Motors whilst Nothing Matters is pure 70s Soft Rock.

Nothing goes all Tom Waits, yet Stay Busy is pure Lounge Funk. Travel Light is all Love Boat Tropicana. The band are at their best though when the Pop breaks out. Everything is a wonderful slice of UK New Wave Pop and the stand out song is Treat Me Like A Christmas Tree.

That song perfectly blends the catch all of Modern Prog with a big AOR Chorus, there's even a blistering guitar Solo to close it out. Who would have thought these four would record something so catchy. I'm glad they are and I hope to here more in the future. I'm Separate is Top Notch.

Posted by Anything Should Happen at 19:38