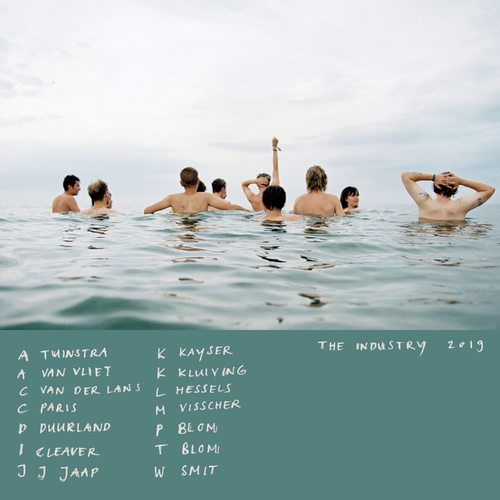 Every now and then, more then than now, you hear an album that absolutely knocks you sideways. These moments are few and far between. I like to think that I know what's going on, so when something hits you out of the blue, you want to find out much more about the artist. I'm in the process of that.

This trek started when I first heard Buildings, a song that sounds like a cross between Field Music and The Futureheads, so obviously there will be XTC comparisons. It is a wonderfully inventive offering and it made me want to find out more about The Industry.

On finding the album, I am even more captivated, even though little is on it to compare with Buildings, except  Limbo which is a fantastic slice of Indie Guitar Rock. Now that I'm armed with more info, I will happily blab on about how it came to be and the songs contained within.

Willem Smit of Canshaker Pi and Personal Trainer was contacted to do something for The Into The Great Wide Open Festival in the Netherlands. Having decided to gather together his favourite Dutch Indie Musicians together to make the album, he wrote the ideas for all the songs and then finished them with the guests.

At the end of the summer last year, all 14 participants headed off in a boat to the Durch Island Of Vlieland. All songs are performed by Personal Trainer, which has a fluid shifting Live Line up with guests such as Pip Blom, Cees Paris and Jaap van der Velde of The Homesick. (Incidentally, I will be reviewing the new album by The Homesick in the upcoming week).


The album was recorded on the boat and the island and the results are awe inspiring. Those two Indie anthems aside, the rest of the album contains nothing similar. The whole affair is all over the place, wonderfully so. The Window could almost be Lounge and includes some splendidly wayward Trumpet from Ian Cleaver.

Frisbee is pure C86, whilst Lena Hessels provides a wonderful vocal on the brooding, moody, In Flickering Time. Pip Blom takes over on Oh Not Again, backed by six local schoolchildren on a dreamy soundscape. that borders on Prog.

Solo Blasting is a Personal Trainer Song that takes New Wave Garage to a whole new level. Compare that to the beautiful calm of Race Car. The album excites even more when the chances are taken and Obsession does that and more. A Nine minute almost Avant Garde explosion, it is a crackerjack affair. The whole thing is rounded off by a piano instrumental, just to add more variance.

There's so much to like here and I certainly want to hear more Lena Hessels, but most plaudits should go to Smit. With a concluding album to come from Canshaker Pi and then a concentration on Personal Trainer, the future certainly looks bright. In the meantime, The Industry is an exceptional album, essential to all.

At the moment, the album is only available on Spotify here.  It will be going on Bandcamp and when it does, I'll update you with the link and embed a few songs. In the meantime, I have linked "The Making Of" video from You Tube. You can also find out more about the project, with brief commentary on all 12 songs here.

Email ThisBlogThis!Share to TwitterShare to FacebookShare to Pinterest
Labels: The Industry