I Do You Do Karate - One Last Job In Mexico 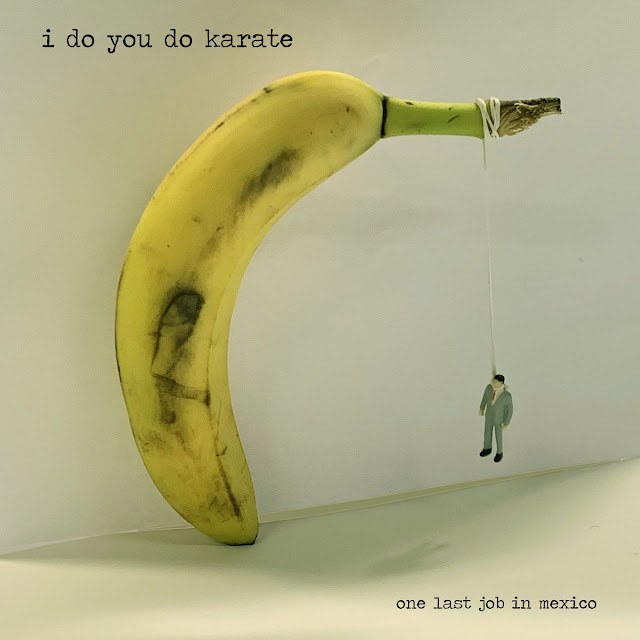 Bergen's I Do You Do Karate's second album emphasizes that their wonderful debut album was no flash in the pan. This is Indie Guitar Pop at its very very best. It also provides the opportunity to praise Nic Dalton's wonderful Sydney label, Half A Cow. Half A Cow has been an Indie beacon of light for 30 years.

One Last Job In Mexico resides somewhere between UK 80's Indie and IRS, probably leaning more towards the latter. You can just imagine them being produced by Mitch Easter. A Norwegian band on an Australian label sounding like UK and US Indie, you just know it is going to be great and it more than is.

The Power Pop brigade will love this (if they can put down their Badfinger and Raspberries albums long enough), as will the fans of clever Indie Pop, think XTC, The Sugarplastic et al. The lyrical wit oozes out across big hooks and killer riffs.

I really can't praise this album enough. Suffice to say, the difficult part has been selecting three songs to embed, I could have chose any of the 10. 30 minutes in total, you can play it twice in an hour. Whilst most here are three minute gems, a big shout out goes to the closer, Wild Bunch Rocking, which is close on six minutes. The last two and a half minutes rock out in Everything Flows style, truly splendid.

Don't expect ballads and I love you do, yes I do's here. Every song is small but perfectly formed, says what it wants, cleverly, to say and gets off. Styrofoamed is like a popped up REM. The Kicking And Screaming Song sounds all gentle Housemartins, until it kicks and spits.

The slowest and most pop they get is on the wonderfully titled Olivia Newton John in Xanadu. Then there are the absolute joys like the Weezer-ish Love Comes To Town. What a fantastic album, it'll definitely be high up in the IDHAS Albums Of The Year. One of the reasons for not doing your Best Of 2020's until the year is actually done.

You can listen to and buy the album here. You can find out more about the Half Cow label here.

Posted by Anything Should Happen at 16:46

Email ThisBlogThis!Share to TwitterShare to FacebookShare to Pinterest
Labels: I Do You Do Karate