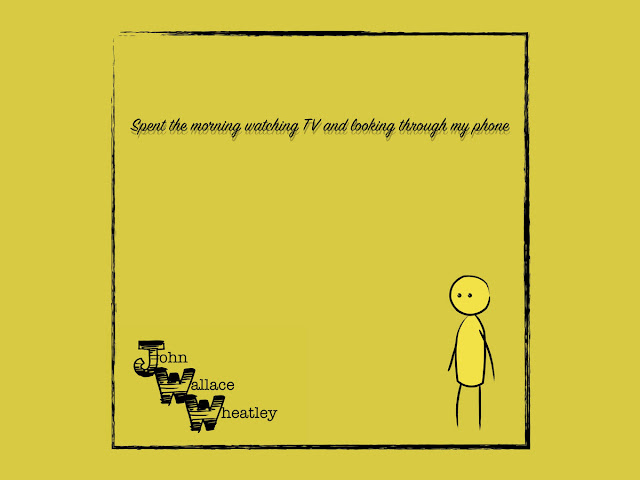 John Wallace Wheatley is familiar face on the UK Americana scene from his work with Suburban Dirts and with his cousin Donald Byron Wheatley. Spent The Morning.... is John’s debut solo album and oscillates between soulful powerpop and epic rock & roll. The LP begins with the soulful Cemetary Smokes, which is based on John’s experience of spotting the grave of a namesake.

Then it’s Heartstrings, a postmodern pizzicato take on the early Motown sound co-written with Donald. Last Man Standing is a Badfingeresque ballad drenched in mellotron; everybody has that friend who’s on the sesh every weekend, but we all know what Smokey said about the life of the party.

There are a few recuring musical and lyrical themes on this LP. The challenge of Wheatley balancing music, family, kids with his day job in the film industry. Wanting to be noticed/remain anonymous, time passing, pennies dropping, existential stuff. Neurotic Dancer is a punchy Vampire Weekend meets Hall & Oates groover. In a parallel universe, this would be a huge hit. In The End is all lolloping guitar and barbershop harmonies.

Then a big beep had me wondering if there was something wrong with the review copy before an eire version of Cemetary Smokes with its cinematic strings that called to my mind the arrangements of David Campbell. When the riffage of I’ve Only Just Realised kicks in, I pictured Harrison rocking his SG. The White Album guitar fest continues on World War III, which stomps along until the chorus drops, everything goes halftime and spacey; a device used a few times on this record to grand effect.

The Singularity is a knowing look at what it is to be a jobbing songwriter  “like every other bearded wannabe” which sounds reminiscent of something from late 90’s Longpigs, Embrace kind of vibes, before the album ends with the title track of sorts.

The Morning Never Came contains the line “spent the morning watching TV and looking through my phone”. It’s a pretty and poignant reminder of how fleeting our lives are which starts off like Blue era Joni building to a crazed crescendo, Wheatley primal screaming “every book I ever read, song I ever wrote... none of this was meaningless”. In a year in which the whole world seems to have turned to films, TV series and their radio to get through, the messages on this record really resonate.

Posted by Anything Should Happen at 22:42