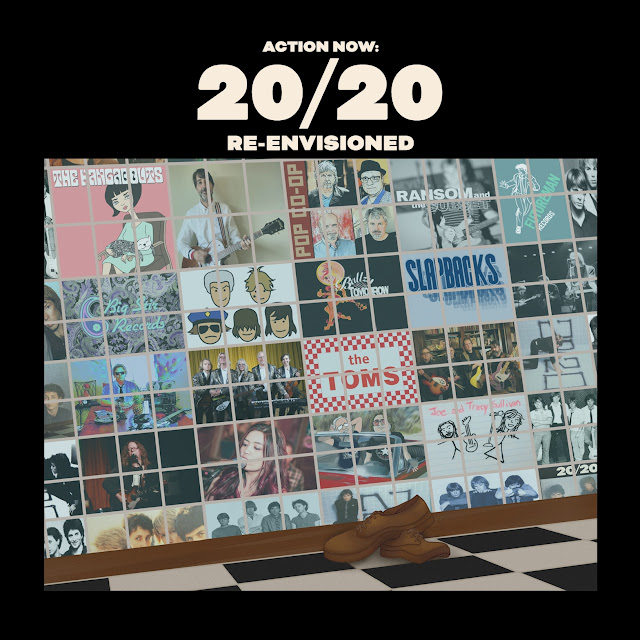 There are the tedious arguments about what is and isn't Power Pop and a reluctance from some Artists to be named in the genre, but there is so much to like about the scene. Melodic sing along pop songs, largely electric, enhanced by hooks, solos and harmonies.

Amongst the obvious candidates in Power Pop land, there are bands that don't get the credit that they deserve for their influence. More recently that has started to change and 20/20 are certainly one of those. The band could be easily linked to New Wave or Pop Rock, but Power Pop it is.

Coming from the second of the three main waves of the genre. What they added was a crunch, an almost live feel. The hooks and the choruses were still aplenty, but there was an edge. Despite my usual reservations about Tribute albums, mainly asking what the point of them are, there are exceptions and the better ones are usually on the Futureman Records label.

The best Tribute albums feature a mix of the loyal "true to the original" versions and the unexpected takes on the song. You have that here, but there is also the sheer fact that 20/20 deserve recognition for what they achieved and how their work still stands up.

If you ever wanted an artist nearest 20/20, you would have to choose Chris Church. He treads similar territory and his version of Remember The Lightning is every bit as ace as you'd expect. It is also great to hear Plasticsoul opening proceedings. We are long overdue a new album from Steven Wilson's lot.

With two obvious choices to open the album, it is worth seeking out some unusual takes. The Hangabouts turn A Girl Like You in to something almost Baroque Pop and Robbie Rist's Ballzy Tomorrow convert Cheri into a hoedown. Both are superb.

The Armoires version of The Night I Heard Her Scream is inspired. The joint vocal works beautifully and the violin adds another surprise direction. The Brothers Steve turn Beat City in to something indelibly them, garaged up with Glam Rock overtones.

Talking Of Glam Rock, Popdudes could be The Glitter Band and I can't get the image of John Borack with stars on his face out of my head. Joe and Tracy Sullivan add a fine Bubblegum cover of Giving It All and Irene Pena punks up Tonight We Fly.

There is also something special about The Toms covering 20/20, both bands of a similar vintage. Action Now stands up in its own right. Forget that this is a tribute album, it is a fantastic listen all the way through. This is both a credit to the artists involved and an under lining of how fine a band 20/20 were.

You can listen to and buy the album as a CD or download here.

Posted by Anything Should Happen at 19:35