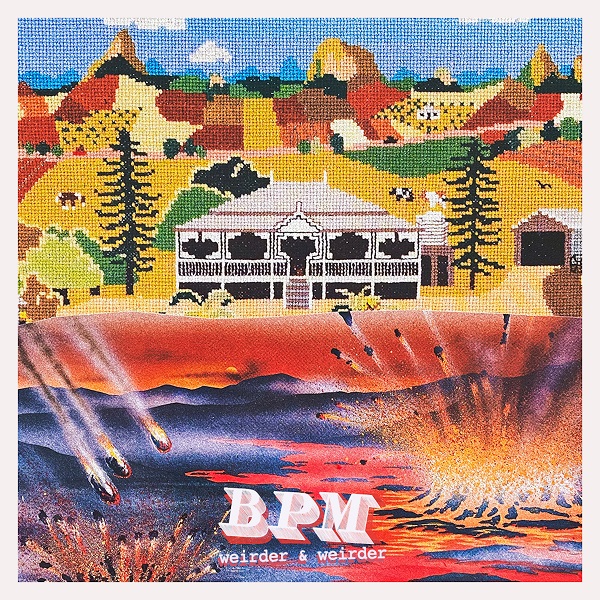 Brisbane's Ball Park Music have a much bigger following than the bands that generally get covered on here, but Weirder & Weirder is such a fantastic album that I want those that haven't yet discovered them to be converted.

2020's self titled album was an outstanding listen and approaching the listening to this, I did wonder if that album would be the masterpiece that could never be bettered. However, the five piece's seventh album just sets the bar even higher.

Ball Park Music are very much the sum of their parts, they have every base covered and the performances confirm that here. The twists and turns are continually unexpected, but never at the expense of the song. There are so many ideas that flow in and out, you just find it difficult to appreciate just how good they are.

Sam Cromack's songwriting has an incredible depth, sometimes a song will seem more like a stream of consciousness. The title track being a great example with comparisons to a casserole and being a "Bun Baby". Having said that, the variety in each song seems built primarily on being a simple song that the band then get hold of and just take it into unexpected places.

Cromack's vocal is also adept. It can be incredibly gentle, particularly on the acoustic parts, almost Bolan-esque in its fragility and yet he can also belt out a song such as Manny. It can be a little Brit Pop, even Thom Yorke when he isn't in shouty mode. Yet I'm also reminded of Jeff Lynne across ELO's first four albums before mellow became the norm.

Another take, I got from the album is that is a proper album. Songs just seem to segue and flow across the piece. The 12 songs should really be listened to in one sitting as each compliments what went before and what comes after.

Some of the arrangements just make you want to step back and applaud. The Baroque arrangement on Beautiful Blueberries is simply beautiful on what should really be a singer and acoustic guitar song. Yet Right Now has a Glam Rock verse and a Screamadelica sing in a field chorus.

Pleb Rock is great Intelligent Indie Pop with a killer chorus and Stars In My Eyes is in Robyn Hitchcock territory. Sunscream is poptastic, a song that just builds and builds with a "Hey Now" feel part way through.

Weirder & Weirder was recorded in six months with the band in the same room and it shows. This has let all the ideas merge into fully formed songs that contain so much in all. Beautifully sung, played and produced, this is a band that knows what they are doing and wants to show everyone this.

As I introduce Ball Park Music to people, the main comment is that they don't sound Australian. I see the point a little as Oz was known over here for "Barnesy" Rock and Power Pop. Those days are long gone, there isn't an Australian cliched sound now. Ball Park Music have offered up a real potential Album Of The Year. Highly Recommended!

You can buy the album everywhere and here. It is on all the streaming sites and You Tube here. You can find out more about Ball Park Music here.

Posted by Anything Should Happen at 15:25