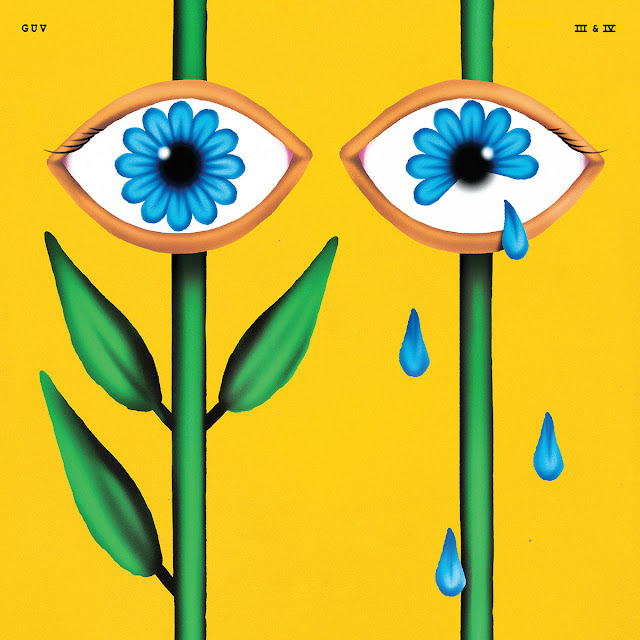 The last few years has seen the emergence of two of the finest Power Pop artists. Michael Collins's The Summer Holiday and Ben Cook's Young Guv. Both have been fairly prolific, yet the quality has never dropped and they have a masterful way with a chorus.

Young Guv are currently in the UK, so do catch them if you can, dates are on the bandcamp site linked below. There are also exhaustive notes on the making of the albums on Bandcamp too, so I'm gonna concentrate on the music.

Written in the wilderness of New Mexico and recorded in Los Angeles, Guv IV has just been released and Guv III came out in March. The two have been combined as a double coloured vinyl release and are available together as a download at a bargain price. A Bonus Track is also included.

Guv III has some of the strongest Guitar Pop that you are likely to hear. Couldn't Leave You If I Tried is wonderful Jangle Pop and She Don't Cry For Anyone is a splendid 1966 jangle. Scam Likely is fantastic Psych Pop with the emphasis on Pop. Lo Lo Lonely may be the best Teenage Fanclub song that they didn't write.

Then there is It's Only Dancin' and Only Wanna See U Tonight which enter 1970s Disco Pop. Guv IV is a different beast altogether. There is a real 80s feel to the album and the Guitar is much less prominent with keyboards more to the fore and some wonderful Slide Guitar.

Wind In My Blood is so close to David Gates and Bread, Helium is all Miami Vice and Maybe I Should Luv Someone Else instrumentally is very Hank Williams. Cry To Sleep is Soft Rock Bossa Nova and Overcome goes all Screamadelica.

Yet Sign From God is all Psychedelia. Too Far Gone is top notch Psych Pop, very Orgone Box like. Guv IV doesn't jangle, but it reveals another side to Cook that is just as interesting. You can buy the double package or each album separately. Both are essential listens.

You can listen to and buy the albums on the Young Guv Bandcamp site here. The Young Guv Website can be found here.

Posted by Anything Should Happen at 17:35