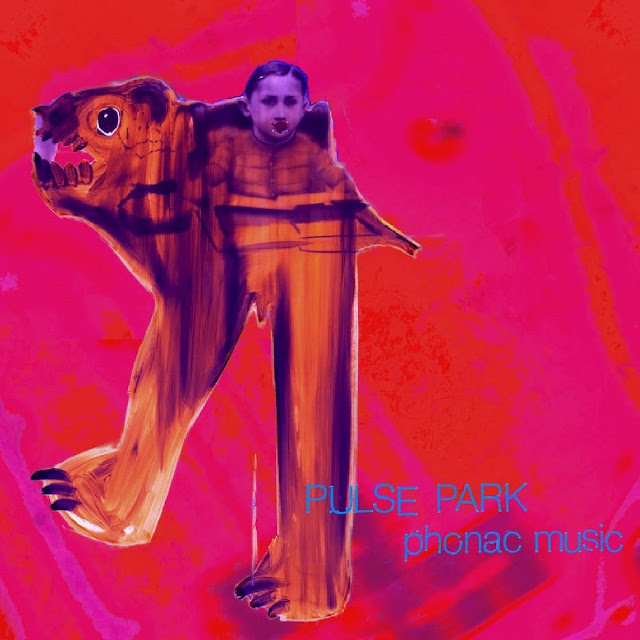 A trio of reasons led to me to this trio. I'm an admirer of Brighton's Shoredive Records label who are a great supporter of new music, particularly Shoegaze. Nathalie kindly sent me this album. Then a late night social media message from the band was cheeky enough to get me more interested.

Finally, I have a lot to review at present, but most of it was melodic Pop Rock or albums that have a while to release date. Pulse Park are an obvious diversion from both and I love the album. This is a debut that sounds so assured and the band know what they do best.

Phonac Music seems caught between late 80s UK Indie College Rock, the likes of Dinosaur Junior and 90s Shoegaze and it works a trio. The material doesn't naturally relate to a Power Trio, but when the band let go they become one.

Generally though they hit a much gentler vibe. They hit a riff and stick to it in a way Teenage Fanclub do, but Pulse Park haven't got The Byrds and Big Star fixation. There's a lot of the Glasgow Indie Rock of the past.

Shoegaze isn't necessarily noted for choruses, but there are plenty here, particularly on the magnificent Apollonian Heart which has a chorus to die for as well and even rocks out. It is a killer song and sets the seal on a fine album.

Elsewhere Antibody kicks in with a Post Punk punch and Strange Matter is like a rocked up Dropkick with a riff that is dying to break out into a solo, but never quite manages it. Sine Wave even heads into the UK New Wave Beat of the late 70s.

Beautifully produced and expertly played, seldom is a debut album so accomplished. This type of album was really prevalent four or five years ago. The fact that it isn't now makes Phonac Music sound like a refreshing change and I certainly appreciate listening to something different from the norm. Highly Recommended!

Posted by Anything Should Happen at 19:17