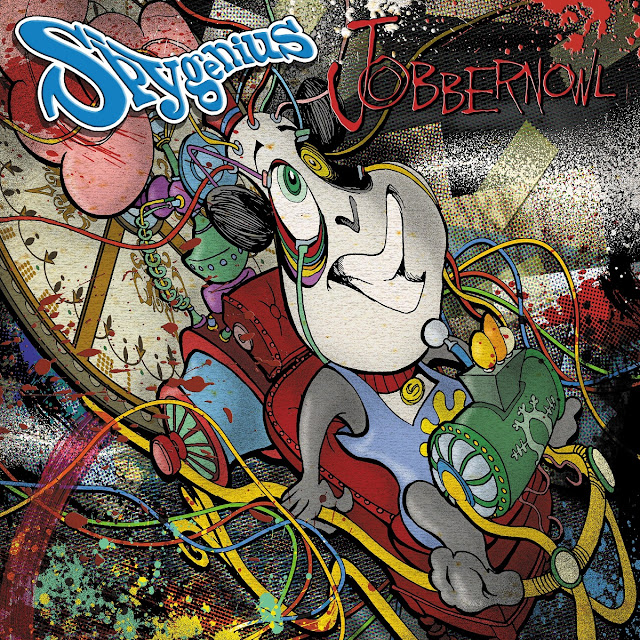 To my ears, Spygenius are the best Psych Pop band in the UK and possibly, the world. Incredibly inventive and never afraid to experiment, they also possess in Peter Watts one of the great songwriters of recent times. Jobbernowl progresses their catalogue even further. Man On The Sea was a wonderful album, but its length gave the impression of melancholy and a slight moodiness. Blow Your Covers is one of the great Covers albums ever and I'm one who normally cringes when I hear the word "Covers". However an album of other people's material doesn't stay in the memory for too long.

Knowing the loss that the band felt over the past year or two and the dreaded Covid Effect, I expected a deep album that reflected on that loss, but that loss is dealt with lyrically with if anything, a jauntiness. The Psych Pop is still here, but this feels far more Pop than previous offerings.Matt Byrne's keyboards are as splendidly 60s as ever, but it is the rhythm section of Ruth Rogers and Alan Cannings that shines most. This is quite an album for Rogers, her Bass Guitar not only drives the album, but there seems more involvement vocally and that is what makes the album more Guitar Pop.

There also appears to be less pace at times and the slower songs show what talent is present. The excellent ballad, Son Of The Morning was played on the IDHAS 10 Song Mix this week and has had the biggest reaction to any of the songs included. Of Narcissus is simply magnificent, Lennon late Beatles Pop maybe and contains a lot of words as indeed the whole album does. Mandy Rice-Davies Applies is intelligent gentle melodic pop, again out of kilter with what Spygenius normally offer up.

Yet listening to the album, the opener is typical of what the band are great at. I Dig Your New Robes, Pierre and you'd be forgiven for thinking this is exactly what you thought you'd get. Sky-Pie, Century 21 is a particular favourite, I love the second line responses, although I have no idea what the song is about.2020 Revision edges towards Folk Pop. Screwy, written and sung by Ruth Rogers adds even more variety and contains a wonderful Austin Powers Organ solo. Then there is the bizarre Music Hall closer, Foucault Swings Like A Pendulum Do. The song is a mindboggling mix of Bonzo Dog Doo Dah Band, New Vaudeville Band and Monty Python Sings.

There are many great quartets around, many who do Psych Pop, many who offer up Intelligent Indie-ish Pop, but no one does it quite as well as Spygenius. Jobbernowl feels a little more commercial than previous albums and is exactly what is needed as we edge back to normality. This album is essential and most definitely the reason that I love Psych Pop so much. More than any other genre, it requires an openness to your influences, an ability to write and play melodic songs with a twist and lyrical intelligence. Jobbernowl has all these things in spades.

You can listen to and buy the album here and here. It is released on Friday 24 June and I will embed three or four tracks on release.

Posted by Anything Should Happen at 14:28

Email ThisBlogThis!Share to TwitterShare to FacebookShare to Pinterest
Labels: Spygenius