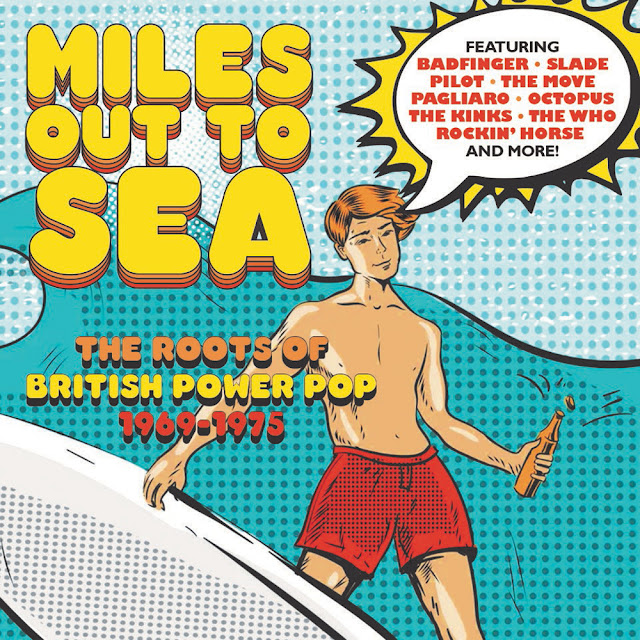 I freely admit that the days of compilation listening are largely in the past for me. A combination of available time, the playlist era and complete boredom with them turned me off. So a 3 disc compilation could be a real challenge. Does anyone usually get around to Disc 3? But here the subject appealed. 1969 - 1975 isn't a Pop Rock period that gets talked a lot about and I approached it knowing that the ridiculous "Is It Power Pop" arguments were long ago and I wasn't ever gonna revisit them. I never once listened to the songs thinking of whether or not they were Power Pop, it just doesn't matter.

The other problem that can happen with a compilation of this nature is that all the usual suspects and songs can normally appear. For instance I can probably name every song that appears on a Now Glam Rock type thing and those that don't are probably due to rights issues or you get a live version from 30 years on with one original member still in the band, usually the bass player. With all those reservations, I am more than happy to report that Miles Out To Sea is none of these things, even the title is an unexpected Slade inclusion. The main take I took from listening to this was that Pop Rock or Power Pop was not just about Badfinger, the likes of Pagliaro prove that.

The song choices are not too obvious either. Take for instance Pilot, a beloved band that will always bring out thoughts of Magic and January, so people forget what a magnificent song Just A Smile is and the original single version of that is here.Stealers Wheel would usually get Stuck In The Middle With You, here you get one of favourite songs by them ever, Go As You Please and how great is Octopus's Rainchild, a song that I am kicking myself for not having played again and again earlier.

There will be bands that you have never heard of. Shakanea anyone? The Fabulous Ratbites From Hell? Bands that should have had far more attention such as Help Yourself and you appreciate how great Iain Matthews is. Then there are bands I love with tenuous links such as Budgie and Stray. Artists that I've never been fond of such as Rupert Holmes and surprises such as the sadly recent departed Rick Price. There are also real memory joggers.

The Move's Message From The Country period isn't one that I look upon as a major tour de force by a band I adore and bought the first album under my own steam from. But Chinatown is a fantastic single as was Tonight. Liverpool Express are thankfully here as is the heroic Jimmy Campbell, but the Kinsley - Campbell axis of Rockin' Horse is a major worthy inclusion. If only they stuck together for a bit longer and a memory that they backed Chuck Berry on his 1972 UK adventures.

Not everything here is a winner, you wouldn't expect it to be on a 74 song compilation, but the 4 hours fly by and the collection is a splendid and surprising listen. It is mainly songs that you won't have heard about before or maybe haven't heard for a long time. Miles Out To Sea is a cracking listen, joyful too. It is a reminder that Pop Rock from the period could be such a captivating listen. It wasn't gonna blind you with lyrical excellence and depth, but it would provide you with catch melodic tunes that got your foot tapping and make your life seem just that little bit more sunny.

You can pre-order the 3 disc set from Cherry Red here. You will be surprised at what an uplift this collection will give you.

Posted by Anything Should Happen at 20:36